Elsie Fallulah Graves of the Whiskers and Purrs Gang is having her 6th birthday this coming Wednesday, July 15. The only present she wants is a birthday greeting from Anderson Cooper.

She loves, loves, loves, love, loves him. No, she doesn't want to marry him. She just wishes she was his cat. Why we don't know. He would never be home to feed her. She'd undoubtedly be relegated to the outdoors, trying to survive on catfish from his swimming pool. She'd be lonely and miss her mom Jenny and her 11 brothers and sisters. But there's just no accounting for taste. We like Elsie Fallulah, so we hope she will get her wish. 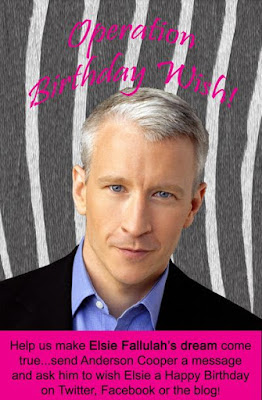 Are you listening Anderson? The Cat Blogosphere and its woofie and hammie and bunny friends are woofing, meowing, chirping, burping and -- whatever it takes-- to get your attention!

We felt so sorry for Elsie Fallulah pining away over Anderson Cooper that we sent him an email via CNN a few months ago, explaining she is his most ardent and dedicated fan, even giving him her blog address to prove it. Of course, if he ever received the message from CNN staff, he probably thought we were a little balmy in the belfry, but this time there will be a host of furries passing on the message. So clean out your ears, Anderson Cooper! Make Elsie Fallulah Grave's birthday special. Send her a birthday greeting! Hey, make it extra special -- send her 3 greetings: Facebook, Twitter and blog!

So for any of you furries (or humans -- you can help too) who haven't yet heard the news or don't know how to contact Anderson Cooper:

We don't facebook or twitter, but many of you do. Ask him in your message to send her a Happy Birthday note at any of these places:

*************
And speaking of birthdays, our friend KC finally got to read her email about Percy's birthday and Sam's Gotcha Day on Thursday, July 9, so she sent them a lovely, belated card. (Are you paying attention, Anderson Cooper? Cards are nice on a birthday.) 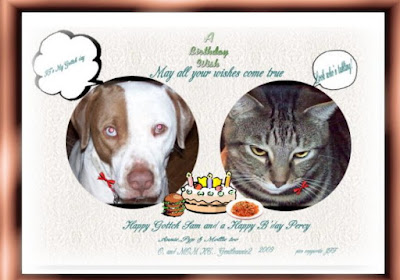