I would like to thank everyone for their kind emails and comments on our post Farewell Sam last week, as well as on Facebook.  I am also thankful for the lovely graphics received. 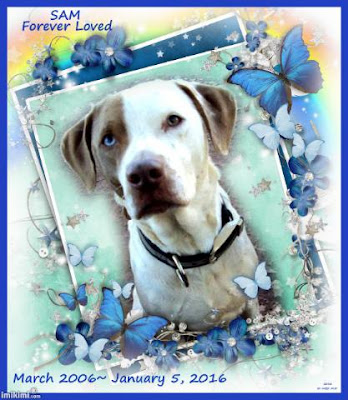 Today, I received the lovely graphic above from Pipo and Minko of WeBeesSiameezers and Barks from Mr. Jack Freckles and their human, Ingrid.  They made this as a memento and I love it. 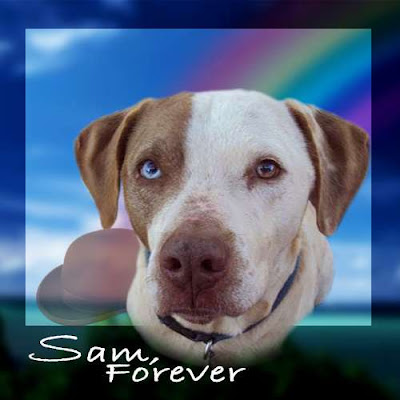 And I can't forget the lovely graphic Ann of Zoolatry created and sent out when she heard the news.  She is so generous about doing this for everyone she knows or knows of who loses a furry.

Since this is the second time in less than a year that I've had to deal with injuries while taking care of a sick animal, I am not rebounding well.  Sam was about 60 pounds heavier than Cameron and needed a lot of physical care.   At this time, I don't know when - or if - the Funny Farmers will return.
Pawed by Jans Funny Farm at 1/13/2016 01:08:00 PM 43 comments: 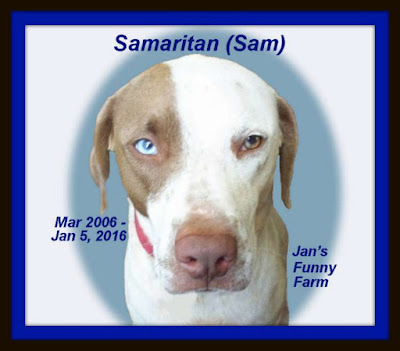 Sam passed away last night, Tuesday, January 5th, one month to the day after having his first (known) seizure,  It has been a hard month for all of us here, especially for Sam.  He had a second stoke and tried but couldn't come back from it.  It hasn't been quite ten months since we lost Cameron.

Sam was a big dog, not a gentle giant, as he had no idea how strong he was.  But he was loving and fun - goofy even.  He loved treats and until the last few months he loved to be first to have his picture taken when the camera came out.  At one time, he and Marcus were always vying to be first to have a picture taken when the camera appeared.  He was a huge presence and I will miss him more than I care to consider.

Mr. Doug thought it funny to hear, "We froze last night trying to keep the house cold,"  but it's the truth.  We had to keep it cold until Mr. Doug could come this afternoon and pick up Sam's body.  Sam will be buried next to Miss Mother's Benji and Shorty and Mr. Doug's assorted dogs.

Merci, the sensitive soul, has been sick, too.  Right after Sam passed last night, she sniffed the covers I took off his body, wadded them up and lay down at Sam's feet.   She stayed there until I went to bed.  Then she came to sleep in her own bed in the bedroom.  As soon as I got up this morning, she was back at her vigil, which she kept until Mr. Doug arrived. 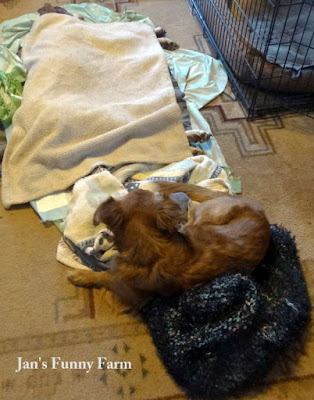 Thank you for all the prayers and kind words through this.  They have meant a lot.

Two days before Christmas I wore myself out tearing my bedroom apart to move and wash everything, so I could gate Sam in that one room to try to protect him as he wandered around.  In the early hours of Christmas Eve morning, the phone rang.  An early phone call is bad news, so I answered the phone in my bare feet.  It was the county emergency warning system, but in the dark I couldn't find the #1 to press to get the message - tornado warning (or watch).  As I walked back to bed, I remembered to move the gate aside, but I forgot the heavy toolbox behind it to keep any of the dogs from moving the gate.  I killed one toenail and injured my toes, possibly broke one.

Christmas afternoon Marcus leaped a rolled up carpet as I headed for the door to let the dogs outside.  He landed hard, smack up against the foot that was moving forward.  It stopped my foot but my body was still moving.  A doorknob stopped me from falling down but things started popping in my back and leg.  The next two or three days were spent screaming from the pain in my knee/leg every time I tried to sit down, stand up, or walk.   A couple of days later little Merci popped a muscle in my leg.

There were sick animals, everything was in the house was damp and covered with tracked in mud, Micah tried to kill Percy, all the animals were acting up, Buddy and Merci were refusing to go outside in the pouring rain ... And if anyone has ever popped their tailbone out of alignment, you know what happens.  Through all of this, I was caring for a sick 70 pound dog.  And, believe it or not, there were many days when Marcus was the well-behaved Funny Farmer!

So, for those of you who have asked, you perhaps now have some idea of why I wasn't responding.  I could barely sit on a chair for five minutes.  Fast emails.  Get offline!  But thank you for caring about us.

Miss Suzanne, Miss Joanne, Miss Johnnie, Miss Cynthia - I am grateful for the meal you each sent or dropped off during the holidays.  I wasn't able to do much for myself and appreciated every bite.

I especially appreciate Mr. Doug's help with Sam's body; however, he injured his back carrying Sam the last yards to the van, and I am very concerned despite his protests he'll be okay.


BUDDY:  Are you ready to open today's post, Marcus?

BUDDY:  You do realize you were playing ball in the mud and your nose is dirty, don't you? 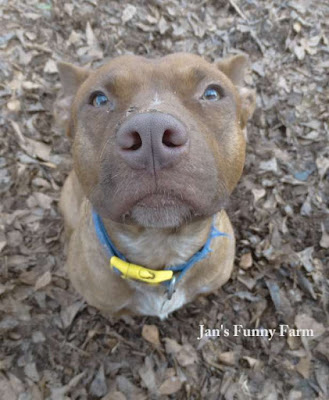 MARCUS:  It is?  Jan should have washed my face before grabbing the camera. Oh, well, I'm photogenic, even with a muddy schnoz.  Let's get this review under way.  Merci, what did you think of the food we have been eating the past 30 days? 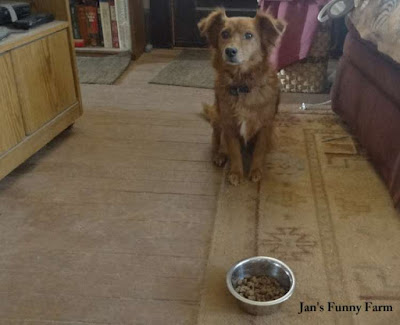 MERCI:  I think it is quite tasty.  I have enjoyed every bite of it. I am sorry to see the challenge end. 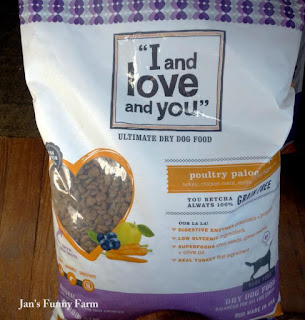 MARCUS:  We started the 30 day I and Love and You challenge last month.

We have already done two posts - our first impressions (I and Love and You Challenge) and our thoughts mid-way (Taylor Steals Breakfast).  This is our final post on the challenge. 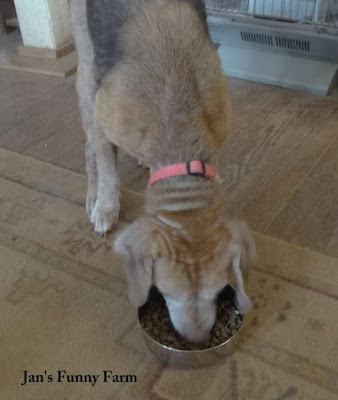 BUDDY:  I have enjoyed it too.  I have had more energy on our walks.  In fact, I have been leading the way in both directions on our walks lately.  Perhaps we should have shared some with Jan.  She has not been walking with us as often as usual.  My coat is soft, and Jan wonders if my bad skin would improve with a longer time on this food.. 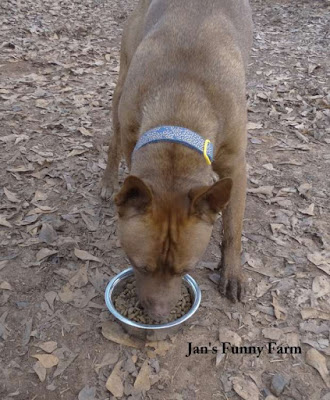 MARCUS:  I have been less food aggressive since Jan added the extra half cup two times a day to my diet and yet I still have my svelte figure. (Oh, should a male dog say "svelte"?)   I still love to eat.  Jan has been impressed because I waited patiently -- okay, impatiently! but politely - for her to feed Sam so I could lick his bowl. 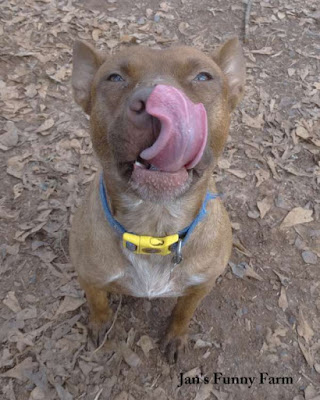 MARCUS:  My opinion can be summed up in this picture.  Delicious!  We all loved it, even Sam before he had a stroke (unrelated to food - he had seizures just before we began) and had to be removed from the challenge.  It has been very sad around here lately with Sam so sick and Jan has been glad we dogs have been eating nutritious food because of the extra stress.

BUDDY:  We wish we could continue on this food but Jan is older than her budget is big, so as we lick the crumbs from the bag, we bid a fond farewell to I and Love and You Nude Food Kibble, Chicken Palooza flavor.  We think if you try it, you will like it, too.

We were provided with free kibble from Chewy.com but we were not paid for this review.  All content on this subject reflects our own experience.