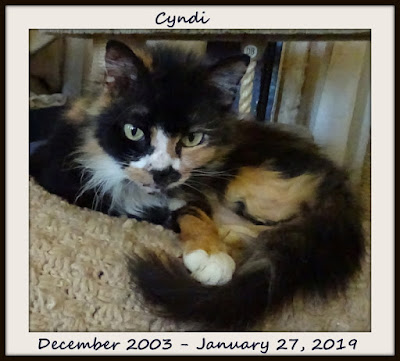 Cyndi, my beautiful calico matriarch, left us this morning.  It was not unexpected, yet it was still a shock.  She did know when I was near, and she loved to cuddle.  .

It is a bitterly cold day.  At least to me.  Perhaps because on top of other health problems I have been going through these past months, I now have a respiratory illness and a fever.  I am in layers with a winter coat and freezing.  It's been quiet here today except for Percy occasionally crying.

Just 5 days ago, I learned Barkley had passed away.  (Farewell Barkley)  He would have been a Funny Farmer if we hadn't already had the city limit of dogs (3).  Merci left us the end of June and Rusty in September.  Percy is now the only original furry sibling and he will turn 15 in July.

Our numbers are dwindling.  I knew the day would come when they would most likely start passing away closer together.  It's one thing to think "someday", another to arrive there.  But I wouldn't trade my time with any of them for anything.  Each one has been special.

Mr. Doug dropped by to pick up something of his today and very kindly took Cyndi's body to bury next to Merci.  As with Buddy, Cyndi was returned to where I first saw her.  She was such a tiny kitten with a huge wad of long, fine fur, living in Mr. Doug's engine hiding from his self-appointed " hunting" dog that wanted to make her the next meal.

Sorry, but today there is no pretense of fun with this post.  I am sick and sad and hurting.

I hope you all have a great week.  I'm going to continue our break and have no idea when or even if we will return.

Cyndi:  Farewell, Barkley.  Most of you guys won't remember remember him.  He was before your time. 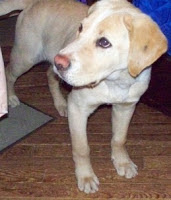 Percy:  I remember meeting Barkley.  He was a pup trapped inside a local mill being torn down.  The building was inside a locked gate, but the foreman at the time helped Jan rescue him.  She brought him home and the local Humane Society helped with his vet bill.

Cyndi:  And then Jan found him a home.  He had a large fenced area to run and other dogs to play with.

Percy:  Jan used to visit him occasionally, but after her old car died, she had no way to go by.  Mr. Doug would often see him, so she was aware of how he was doing.

Percy:  He did have a good life.  I'm sad for his loss and also because at that time the Funny Farm was in it's heyday.  You and I, Cyndi, are the only funny farmers left from that era.

Cyndi:  Do you remember how jealous angel Sam was when Jan brought Barkley home?  He was so afraid she would keep him.  Sam always had to be the center of attention.

Percy:  I understand Barkley was a good dog.  He once lived here for a few days, so it's only right he should have a memorial post.

Cyndi:  I know so many believe in the Rainbow Bridge.  We don't, but if we did, wouldn't it be ironic if Sam was the one to meet Barkley and show him around?


Jan:  Sorry, we're still on hiatus.  I have been unable to do much of anything for a while and need more time to get back on my feet.