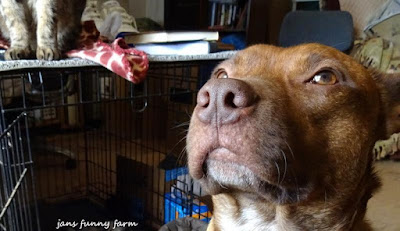 Marcus:  ... and then he fell over backwards and had to dig through his backpack looking for an extra pair of underwear. 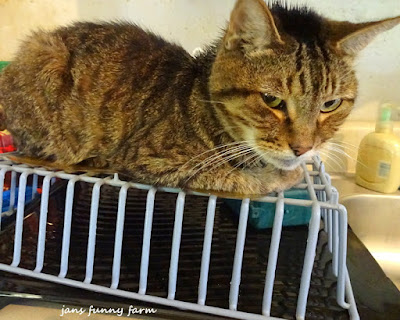 Percy:  Jaaaaaaan, can you come here for a moment?

Jan:  What do you want, Percy?

Percy:  The truth!  I don't believe a word Marcus is telling me about some imaginary incident last week when he supposedly scared some poor guy half to death.

Jan:  Oh, I know the incident you mean.  It wasn't imaginary, but I'm sure Marcus' version of it is.

Percy:  So what's the real story?

Jan:  I was sitting beside the mill steps resting on our walk.  A young man, probably in his 20s, stopped and asked if he could pet Marcus.  Since Marcus was beaten by his owner between the age of 3 and 5 weeks, he has been skittish around strangers, especially males, and will growl if someone raises the voice or makes sudden movements.  He loves Mr. Doug and other men who are quiet around him.  This young man seemed okay, so I agreed.

He knelt down.  Marcus went right over, checked him out and sat down.  You know what an attention-hog he is.  Everything was fine until the guy started to get up, lost his balance and threw up his right arm to keep from falling.  The moment that arm started to move, I knew Marcus would react, but before I could pull him toward me, he shot straight up in the air like someone had lit a firecracker under his butt.  His mouth opened wide and a thundering bark erupted.

The guy, pale and visibly shaken, found his voice.  "Don't worry, I've been bitten before."

"You were never in any danger of being bitten," I responded, "but you sure scared the dog!"

The guy was facing me and Marcus was facing to the guy's left, but I can imagine how unnerving it had to be to be to watch a dog Marcus' size rising with him, right in front of his face, and those great jaws opening wide.  He probably feared he was a goner.  He walked away slowly.  I don't think he'll ever ask anyone if he can pet a strange dog again, which is a shame.  He seemed like a nice guy..

When I stopped shaking, I had to laugh at Marcus' unexpected response.  I asked him, "Why did you do that?"  He just looked at me and innocently asked, "Do what?"

Percy:  I knew Marcus' version was untrue.  He should be a fiction writer!

Marcus:  Well, you have to admit that living with me is never boring.

Percy:  Living with you is never quiet either.