Winton in the Doghouse 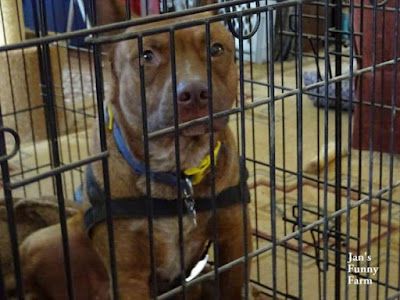 Marcus:  Is it safe to come out yet?

Percy:  You're taking your life in your hands if you come out.

Marcus:  But you're out.

Percy:  Ah, but there are more places I can run and hide where you wouldn't fit.

Marcus:  How long do you think it will take Jan to calm down from this weekend?

Marcus:  She sure was angry.  I had to cover my ears in case she said any words on the bad list that we're not supposed to use.  And when she threatened to throw the computer monitor through the window, I figured I was safer in here than out there.  Who's this guy Winton she's so angry with?

Percy:  Not Winton.  Win 10.  It's the latest Microsoft operating system and Jan said she'd like to make the idiot who created it late.  I think that means she'd like to kill Win 10.

Percy:  She finally found a Microsoft program already on the computer that will download faster - one she wanted to uninstall - but she can't add tags (plural) with it, so she has to use something else to tag.  Then when she tried to move June photos from the May file, all the June photos disappeared and it took a long time to find them.  And the "fun" had only started.

Marcus:  If this was a fun weekend, I must have missed something.  We didn't get to write the post we had planned.  Jan missed dinner and was so hungry she chewed nails.  She yelled at someone named Horse's Rear End because he doesn't understand that NO means NO and she doesn't want the crap trying to be forced on her.  I guess that means we're out of poop bags.

Percy:  Well, look at it this way, Marcus.  There is one ray of sunshine for you this weekend.

Marcus:  I'm trying to hide in a crate.  What could be good about that?

Percy:  For the moment, you're not the one in the doghouse.  That guy Winton is.