Taylor:  You would not believe the problems encountered to write this post.  And they all were caused by Winton.  You remember Winton. We wrote a whole post on how he was trying to keep us from downloading photos from our camera and processing them.  (Winton in the Doghouse)

Cyndi:  But Jan persevered through ice and snow and mountainous trails -

Micah:  What are you babbling about, Cyndi?  I think you're picking up Marcus's trait of exaggeration.

Cyndi:  Well, she did persevere through the heat and humidity.

Micah:  Okay, I'll give you that.  But no more fibbing.  Just tell the truth. 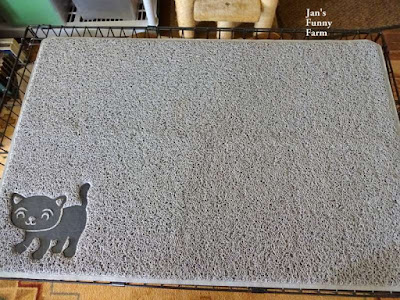 Percy:  We're supposed to be talking about the above photo.  Do any of you know what it is? 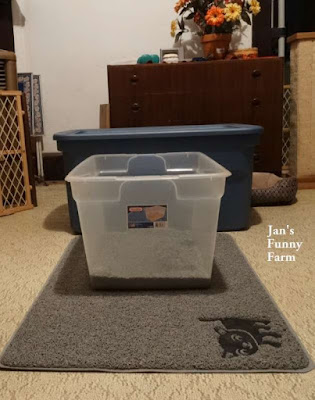 Rusty:  Yes, it's a litter mat.  An extra large litter mat, as you can see. 35" by 23.5". We have large pans and there is plenty of room on the mat for us to leap out and leave any litter stuck to our paws on the mat.

Percy:  Jan likes it because it does catch those stray pieces of litter.  Every so often she just takes it outside and shakes the loose litter out of it. 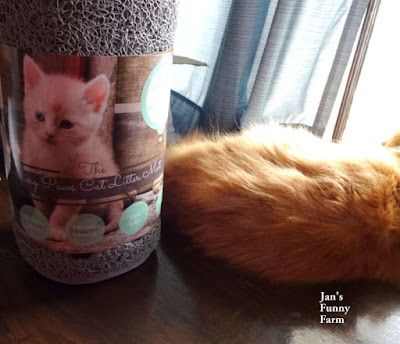 Cyndi:  As you can see, Rusty slept through the first photo session.  Here he is next to the extra large Smiling Paws Cat Litter Mat before Jan unrolled it and let it relax (flatten) on top of Marcus's crate for a few days before putting it to its intended use.

Taylor:  Some cat evidently read that the loofah like material is urine proof and decided to test it because while it relaxed on the crate, Jan wondered why Micah was using it for a scratching post one evening.  Actually, that wasn't what he was doing. To this day, Jan doesn't know which male was responsible and we're not tattling.  Micah, did you do it or were you just trying to cover Percy's pee?

Micah:  I don't pee and tell.  Not on myself and not on Percy.  Suffice it to say, Jan had only to spray it with cleaner, take it outside and hose it well.  The urine did not leak through the thick mat and drip on Marcus's bed in the crate. 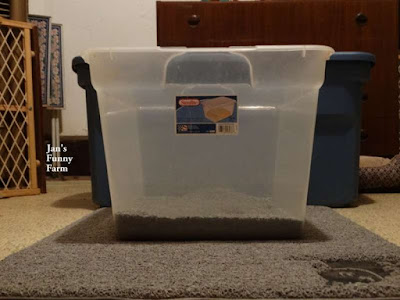 Cyndi:  Jan loves this mat.  All the ones she has tried before have been much smaller.  It's good quality, is BPA free and has an anti-skid backing.

Micah:  It also has a money back guarantee if you are not satisfied.  Jan is very satisfied with ours.

Percy:  The nice people at Smiling Paws are offering 20% off on all orders on Smiling PawsPets.com.  Just use the coupon code "funnyfarm".

Disclaimer:  We received a litter mat for this review, but no other compensation.  Any opinions are our own - and we are very opinionated!