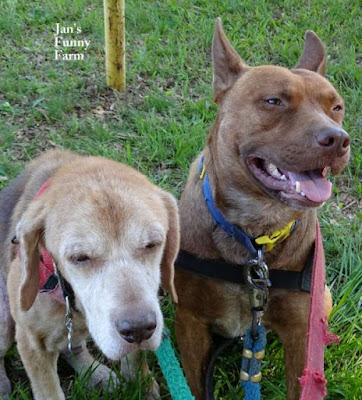 Buddy:  What did the blonde call her pet zebra?

Buddy:  Why would you think she named him Zeb?

Marcus:  It's only logical.  Your nickname would be Bud.  Mine would be Marc.  Per for Percy. So a zebra would be Zeb.

Buddy:  Cyndi would clobber you on the head if you started calling her "Cyn".

Marcus: Okay, then what did the blonde call her pet zebra?

Buddy:  Come on, you know how these blonde jokes go. She can call her zebra Spot but when we get a zebra, we'll name him Zeb.

Marcus:  What if the zebra we get is a girl?


Kittycaperz asked yesterday if we have a zebra joke.  Yes, we did.

We are joining the Pet Parade blog hop with hosts Rascal and Rocco,  Bionic Basil, Barking From the Bayou and Love is being owned by a husky.
Pawed by Jans Funny Farm at 6/10/2016 12:30:00 AM