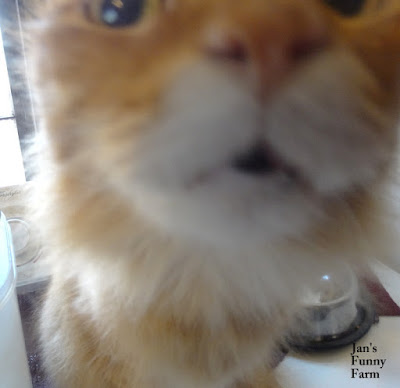 Rusty:  Hey, come closer so I can tell you a story without Jan eavesdropping.  Yep, I'm going to tattle on her.

Merci:  Can I help?  I love to tell stories too.

Rusty:  Do you remember the post we did the other day on Winton causing Jan so many problems downloading and IDing her photos?  (Winton in the Doghouse)

Rusty:  Jan is a bit stubborn and she really fought to download her way - to Picasa on the computer - except Winton absolutely refuses to recognize the computer card reader.  And she found a workaround to ID the photos her way.

Merci:  It's been a bit tense around here since Winton arrived, so we're all relieved.

Rusty:  Monday night she finished the latest batch of photos so we could do a review today.  She was so proud of herself.  And then -

Merci:  And then Jan, who could manage to shoot herself in the foot if she had a gun, discovered some of the photos for the review needed to be re-shot.  No problem.

Rusty:  She moved some things around to make room in the bedroom, grabbed her little camera and ... well, it would look a lot better if she was level with the object.  She doesn't bend well any more, so when she tried to sit on the floor, she fell.

Merci:  No problem.  Now she was at the right level.  She picked up the camera, turned it on and before she could aim, it went dark.  Great.  She crawled across the floor to pull herself up on the bed, found the battery cable and plugged it in to charge the battery.

Rusty.  No problem.  She'd just use the big camera.  But first she had to scoop the litter pan since it would be in the picture and Micah had decided to christen it.  No, she didn't want to try sitting on the floor again.  She pulled over Buddy's 2-step stool and sat down, picked up the big camera, turned it on and -

Merci:  A banner popped up saying "Battery depleted" and it, too, went dark.

Rusty: No problem.  This camera has a spare battery.  She changed the battery, took the photos, downloaded them to the computer, ID'd them, cropped and slapped our name on them, resized them, uploaded them to Picasa online-

Merci:  Where we wrote most of our review post, until Jan suddenly yelled," Stop, we forgot something!"

Rusty:  It's now after 11 PM and we have to wait on something for the review, so we have no post for tomorrow (then) /today (now).  What do we do?