PERCY:  Imagine Jan's surprise when she was walking the dogs on Sunday (Valentine's Day) and Marcus stopped to look behind them.  Jan stopped to see what he was looking at and thought, "Oh, no, another loose dog."

MICAH:  And then she had one of those not again panic moments.  Buddy was strolling, nose to the ground, several yards behind them.  How long had he been wandering alone? 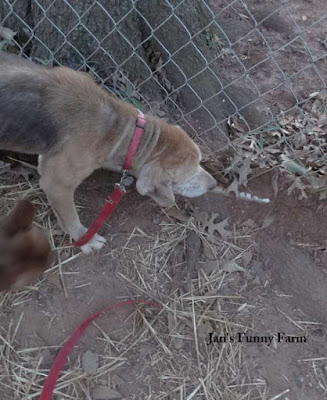 BUDDY:  This time Jan didn't drop the leash.  It snapped.  The camera she carries on walks died so she had to wait till we were home before she could grab a couple of shots. The brown blur on the left was Marcus trying to contain his excitement around a leash. 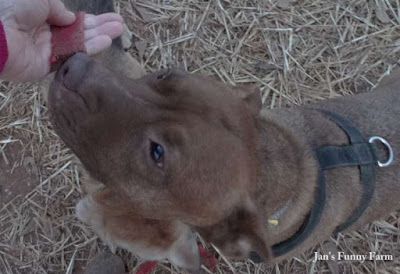 MARCUS:  Here let me sniff a broken end.  There may be a clue as to what was wrong with it.  Oh, by the way, the brown and white furry blob under my chin is not a misplaced goatee; it's the top of Buddy's head and ears.

CYNDI:  Monday - the very next day - the same thing happened, only this time it was Merci's leash that snapped. 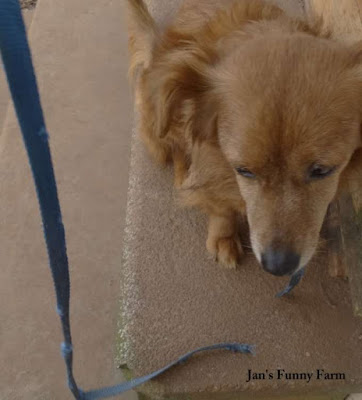 MERCI:  Jan made me pose outside.  I was so ashamed I tried to cower against the screen door.  I didn't do anything wrong but I just know she thinks I broke it. 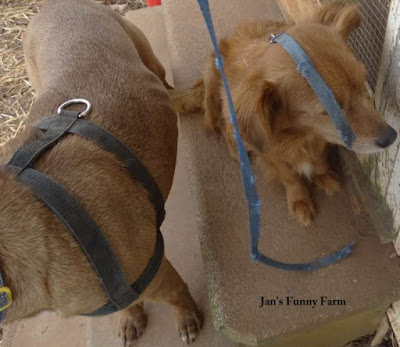 MARCUS:  Don't worry, Merci.  I'll explain to Jan that it wasn't your fault.  The leash must have been defective.

MARCUS:  Confess?  I was leading the pack each time a leash broke.

RUSTY:  Every time Jan takes the leashes down and tries to get you dogs ready to walk her, you run around biting on the leashes.  You're like a human baby, everything you see goes into your mouth. You grab leashes because you're excited, because the others don't walk fast enough, to try to turn them in another direction ... just because they exist.  Your name should be changed to "Drop It"

MERCI:  Jan has soaked the leashes in cayenne pepper, even sprayed bitter something or other on them, but nothing stops you from grabbing and biting leashes.

MARCUS:  Are you trying to say those broken leashes were MY fault?

TAYLOR:  They're not trying to say that.  They are saying it.  You have also been chewing on my toys and de-stuffing them.  Marcus, you're a menace!

MARCUS:  Aw, guys, I should be a hero.  If I hadn't been nipping at the leashes, we wouldn't have learned they were defective.

CYNDI:  We might as well give up, guys.  Marcus has sharp teeth and an insanity defense. 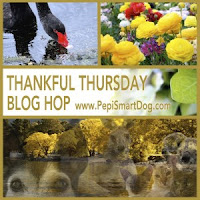 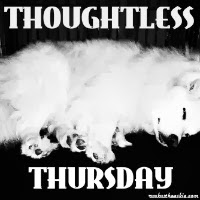 And Ruckus the Eskie for Thoughtless Thursday with co-hosts Love is being owned by a husky and Barking from the Bayou.
Pawed by Jans Funny Farm at 2/18/2016 12:30:00 AM