CYNDI:  We hope you got a chuckle out of our Friday post (I Have A Leak, Yes...No).  But if you think that was the end of the story - in your dreams!

MICAH:  Friday morning began without water again.  We waited forever.  Finally, Jan walked 5 blocks to find two guys from the contract crew.  They said they hadn't turned off any water.  They walked Jan home, looked in both meter holes, searched for a leak, made a phone call, and suggested she call the local water company to see if they had shut off the water. 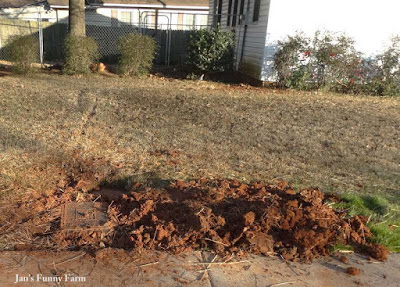 PERCY:  This is what the yard looked like then.  The old and new water meters to the left of the dirt mound.  The connection point close to the smaller dirt mound at the corner of the house.  The water company said the contract crew working in the area had turned off the water.

MARCUS:  I suggested a walk to kill time.  We set off and up the road we ran into a man who was working his way toward the water tower turning on valves.  He had not turned off any water. (Funny, no one turned it off but it sure wasn't working.)  Ten minutes after we got home we had water.  A half hour later he knocked on our door to check on us. Whoever you were, thanks.

MERCI:  About 8 PM Saturday Jan added water to our dinner bowls.  At 10, she went into the kitchen to wash dishes and we didn't have a drop of water again.  She spent 20 minutes searching for the cordless phone she had left on the desk.   The helpful man at the water company contacted the guy on call. 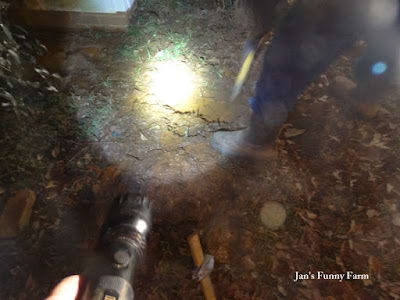 BUDDY:  Devon Slayton arrived.  The meter was spinning!  He soon found the problem.  Inside, we were dry.  Outside we were flooded, clear through and out the other side of the dog pen..  He dug in the mud at the connection site. Miss Uncoordinated held a flashlight in one hand and used the other hand to snap photos.  We're actually surprised any of them turned out. 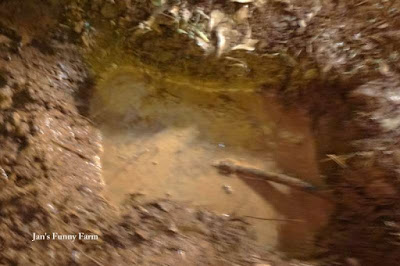 TAYLOR:  I'm new here, but I understand Marcus loves mud and he is upset Jan let someone bail out buckets of water and shovel mud without letting him roll in it first.  He is jealous Devon gets to dig in mud for a paycheck.  Jan thinks Devon would gladly have let Marcus do the digging had he known there was a volunteer handy.

RUSTY:  About 11:30, Devon offered to bring Jan some water from his home to get us through the night.  He returned with Jan's container plus three bottles of drinking water.  She thinks this was such a wonderful thing for a stranger to do so I guess she has forgotten all the nice things we Funny Farmers have done for her.  For example, just Saturday night she had a pile of jumk on the desk and I cleared the desk off for her.

CYNDI:  Pssst, Rusty, stop talking before Jan realizes you're the reason she spent 20 minutes looking for the phone to call the water company. 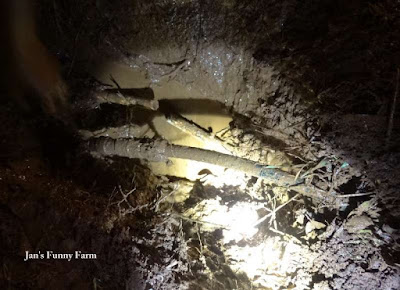 MICAH:  Eerie picture, isn't this!  Those are the water lines that blew apart.  The old one (only 2 - 3 years old) is buried deeper than the 5" the new line is.

MARCUS:  Sunday morning Buddy and I (Merci didn't want to go) took Jan for a walk and when we returned, Devon and Sean Ellington were just finishing.

BUDDY:  Despite the leak-no leak-no water confusion of the last few days, the contract workers and the city water employees have been kind and helpful.

RUSTY:  Jan was so happy Devon and Sean helped us get water again she promised she was going to say something nice about them in a post.  You know how forgetful she is.  She forgot this isn't her blog.

MERCI:: So we'll say something nice about them for her.  Hey, local water department, you have some courteous, helpful people working there.