RUSTY:  Taylor has been with us since November; however, things have been so hectic around here she hasn't had much attention on the blog.

MICAH:  Yes, we keep intending to include her or post photos, but she's been pretty much an invisible Funny Farm visitor.

MERCI:  Yes, she has been so invisible that when she does paticipate in a post, we receive emails asking, "Who is Taylor?"

PERCY:  She first appeared in Introducing Taylor.   She was the headless cat paws under the bed.  She had a head; she was just hiding it from all of you strangers.

BUDDY:  Today we are going to show you how adorable she is.  We have posted a picture or two of her (with a head) since, but we didn't mention what breed of cat she is. 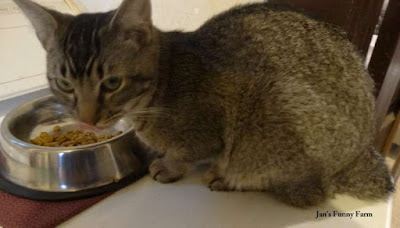 CYNDI:  Do you notice anything about her that is different?  Come on, look again.  You aren't being very observant.  Would you like to borrow Jan's reading glasses?  (Not the ones she stepped on so the eye and ear parts go opposing directions.) 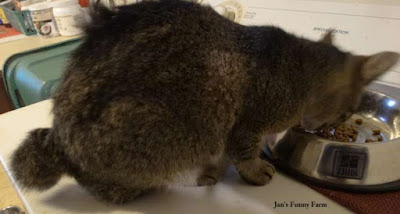 TAYLOR:  Here is a better photo.  Can you see how I differ from the Funny Farmer Felines?  I'm a bobtail!  A petite bobtail.

MARCUS:  She arrived shortly before Sam became ill and died, so she had to adapt on her own during a chaotic time. She never talks and she never growls at me or whaps my face when I try to play with her.   Personally, I think she's a female cat impersonator.

PERCY:  You talk way more than Merci or Buddy together, Marcus  We're thankful Taylor is quiet.

MARCUS:  Well, one of these days she's going to find her voice, and then, if you think I talk a lot ... 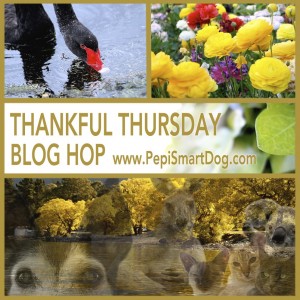 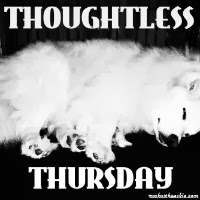 And Ruckus the Eskie for Thoughtless Thursday with co-hosts Love is being owned by a husky and Barking from the Bayou.