BUDDY:  Some of you think we are too hard on Jan for her memory - or, rather, her lack of one - but it's all true.

MERCI:  When Jan got out the camera to take photos of us trying a new dog treat, she opened the bag and there was nothing inside it except crumbs.  Uh-oh. 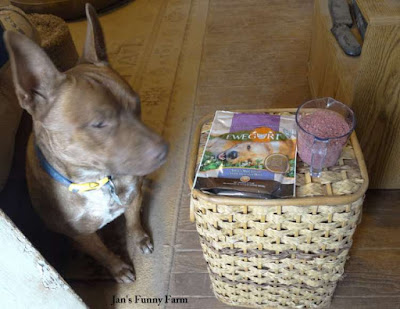 MARCUS:  She immediately wrote an email to the company to explain the treats had been crushed during shipping.   They smelled heavenly and I begged for some.  She poured the crumbs into a cup and asked me to pose in exchange for a taste. 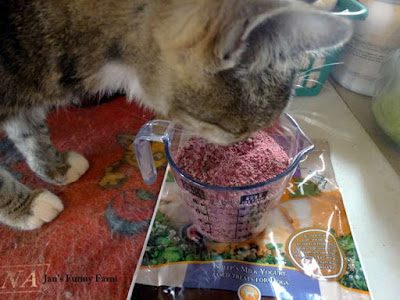 MICAH:  Who left this on the washing machine?  It smells yummy.  What is it? 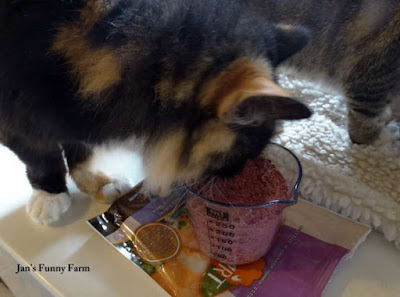 CYNDI:  According to the bag, this is a freeze dried dog treat called Ewegurt.  It's made from healthy ingredients.  Sheep milk yogurt, sardines, kale, beets, parsley, organic coconut oil, and unfiltered apple cider vinegar.  I didn't realize anything with vinegar in it could taste good. 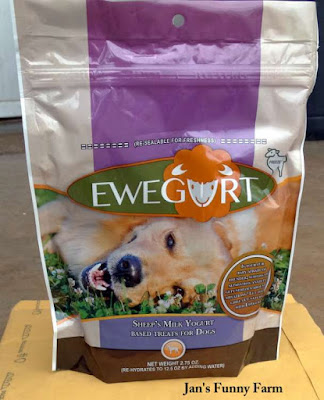 MARCUS:  Hey, those treats are for us canines.  You cats have your own.

BUDDY:  A kind but baffled Miss Jennifer replied to Jan's email regarding the bag of crumbs.  "They are not "formed" because we do not use any fillers or binders. We felt very strongly that people would understand our goal to have a "clean" treat. It can be used as a food topper or given as a treat in a bowl by adding water."

MERCI:  Oh, yes, Jan had completely forgotten the Ewegurt would be topping and not biscuits. 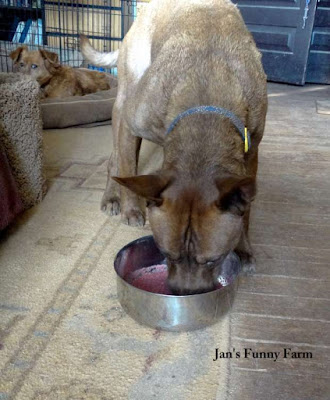 MARCUS:  Jan claims I am super hyper and she is always looking for something that might calm me.  Ewegurt is supposed to be calming so she re-hydrated some in a bowl and waited 45 minutes to see if I relaxed.  Nope!  I was just as wired as ever.

MERCI:  Hyper activity isn't mentioned, but it is supposed to help with fear of thunder, separation anxiety, or fear of new situations.  Jan wishes Sam could have tried it.  He was terrified of thunder!

BUDDY: There are no artificial colors or flavors, artificial preservatives or hidden ingredients.  Ewegurt is reportedly good for a sensitive tummy, also good for pets on antibiotics, and it helps build immune defenses. 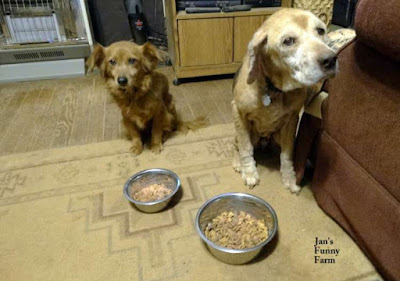 MARCUS:  Don't be fooled by the look of disinterest feigned by Merci and Buddy.  The moment Jan said they could dig in, they scarfed down their dinner mixed with re-hydrated Ewegurt and licked their bowls clean. 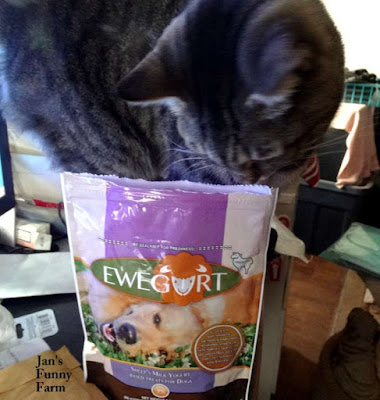 PERCY:  I am.  This Ewegurt smells so tempting but the package says it's for dogs. *sigh*


Ewegurt provided us with a sample package for this review.  We were not compensated and any opinions expressed are from our own experience with the product.