We are privileged to call Bill Walker our friend. We met him after he wrote "Tinker and Poo... The Boys Write." It's a collection of anecdotes about his two Pekingese dogs who, sadly, left for the bridge in 2004. Since then, when anyone he knows suffers a loss, he immediately writes a short welcoming Rainbow Bridge story by Tink and Poo. As someone recently expressed it, he and his Peke assistant Little Girl have a knack "for helping people through their grief in losing those they love." With his permission, we are posting the story he wrote for Fraggle.

But before we do, we'd like to tell you why Fraggle was so special to Jan. She was a sweet dog and that would be enough. But she was also the first abandoned puppy Jan found the courage to help. In the state of Georgia it is against the law to feed or shelter a stray or even to help an injured one. You can be arrested for theft. No joke!

For some reason, Georgia deems it more humane to make people turn an animal over to the police or Animal Control and the animal to be killed than for an pet to be returned to its owner by someone who can/would care for it for an extended time, much longer than 3 days. That also applies to abandoned animals. But to a logical mind, if you abandon it, you are no longer the owner.

But still, even knowing without a doubt this puppy had been abandoned, she also knew Little Hitler. To keep the story short, making the decision to help was an extremely hard one for Jan and it took several agonizing, almost sleepless days to find the courage. The solution came to her as she prayed while walking home after telling the homeowner where the puppy was "hiding" something she hates to tell anyone in this county -- call Animal Control. So instead of a death sentence, the terrified puppy went to a loving home and was named Fraggle. 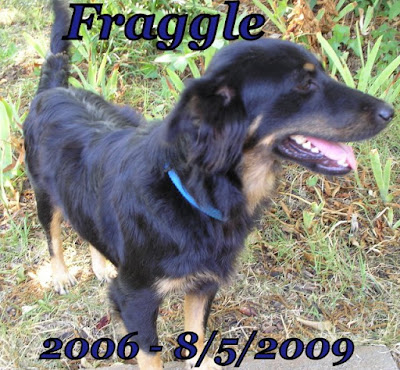 Samaritan: And although Jan had been helping cats for many years, she didn't have the resources, the room or the contacts for dogs. But the next abandoned dog Jan helped was me. So without Fraggle, Jan might have been afraid to help me and I would have been picked up by Animal Control and killed at the shelter.

It is with heavy hearts today that we rolled out the welcome mat for a new member of the gang. Fraggle is the name. This poor girl may have had only three years of happy times. You see, she was one of those that didn't have a good home till about three years ago, when she at last found a true lover of puppies.

Well, today she took a walk, and was hit by a passing car, killing her. But the young man stopped and found who she lived with. Not only that, but the lad helped dig her resting place. Now this doesn't happen every day.

Fraggle told us how she was loved and how she loved Doug, and Teresa - and she must not forget Jan, who stopped by now and then. She got to meet with the other members of Jan's Funny Farm Family also

We know… well, Fraggle told us enough to know that she was loved and your hearts are breaking. We got her all fixed up. Well, the Angels did the work. She has her bed, bowls, and a bag of treats to chew on.

She will be here watching and waiting for her people to come up the lane some day. The people she so dearly loved that gave her a happy home for three years.

The movie tonight? Fraggle Comes Home. She will have a front row seat and lots of treats.