Percy finds the package on the floor first. He sniffs it, and then reaches to touch it. 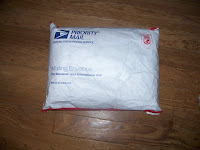 "Why? It's just a package. Jan must have dropped it here."

"But you don't know that," Buddy says, casting a suspicious eye on the package, so obviously out of place in the room. "It could be a bomb."

"A bomb?" "What do you mean, a bomb?" "Who would send us a bomb?" The Funny Farm residents congregate, half poking fun at Buddy with their questions and half frightened he might be right.

Buddy waves a reassuring paw. "Don't worry. I'm a hound. We have a highly sensitive sense of smell. I'll sniff it." 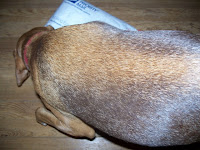 "But you don't know what a bomb smells like," Rusty protests.

Cotton agrees. "Rusty's right. You don't know what a bomb smells like."

Buddy sniffs harder. "I don't smell anything out of the ordinary." 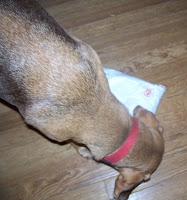 "No, wait," he says, inhaling deeply. "I can just barely smell it through the packaging - after all, who knows how many hands this has gone through - but I do get a faint whiff of cat."

"Cat?" the others chorus. "Bombs don't smell like cat." 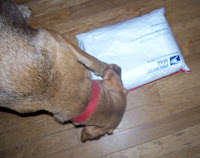 Buddy takes another deep whiff. "That's right, so it must be safe to turn it over." He carefully flips the package with one paw. 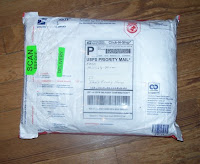 Merci smiles. "Oh, look, it's from Millie's mom. We know them from Darling Millie."

Cameron shakes his head. "Were we expecting a package from Millie or her mom?"

Samaritan places one paw on a corner and Buddy rips the package open with his teeth to discover ......