Last month we mentioned Petsense is coming. Your response was the same as ours - what's a Petsense?

Well, today we have an answer for you. This is a Petsense. 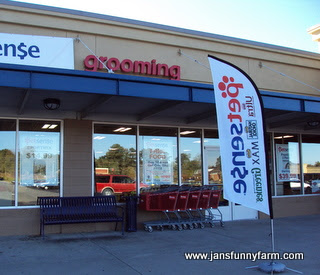 Sorry the name is cut off but the sun was shining right into the camera and Jan had to stand sideways in the traffic lane (in front of a car) to get a shot.

It's something we needed - a pet store that sells pet food brands we can't buy in this area and pet-related supplies.  It also has a grooming "parlor" inside.  The store opened last week and is having several drawings for neat prizes, so anyone in Upson or surrounding counties come on by, check out the store and put your name into one or all of the bins for the drawings.  It's on Highway 19 in the shopping center right next to Wal-mart, so you can't miss it.

We think it's very unfair because we didn't get to visit the store and Jan only entered her own name.  We think she should have filled out a slip for each one of us for each drawing.  We're the furries, not her, so that seems only right.  Okay, so she'd get writer's cramp.  Aren't we worth it?

It also has about a dozen cages where cats from the county animal shelter can be displayed for adoption. Several kittens are the first "residents."  Unfortunately, they all developed a respiratory illness and we fear for the outcome.

But we'll share a few of the photos Jan took.  She wouldn't let us share the better ones because she wants to make designs from them. 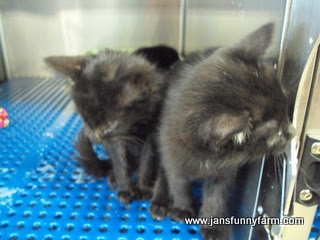 There are actually 3 black kittens in this cage.  One is asleep in the litter pan. Notice the spot of red color to the left.  Each cage has a toy or two, something they wouldn't have at the shelter. 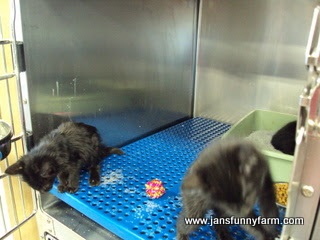 The one on the right kept trying to jump down or climb to the next cage.  Now the one on the left appears to be considering the same move. 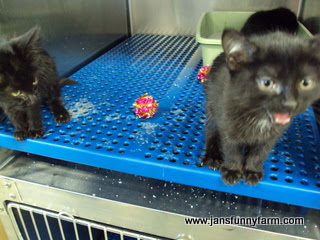 Now this one was taken just a second before the talker on the right leaped onto Jan's shoulder and started purring.  Regretfully, she decided it might be safer to take photos through the bars.  It was nice of Josh, the manager, to let her open the cages to try for good shots, though. 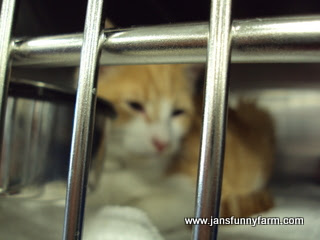 This little one never moved around.  He must have really felt bad.  He was asleep a few minutes later. 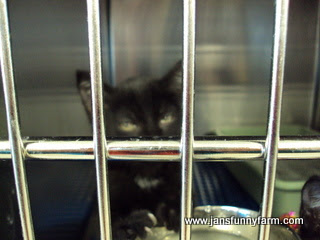 Look at those get-me-out-of-here and take me home eyes. 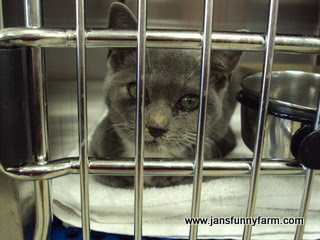 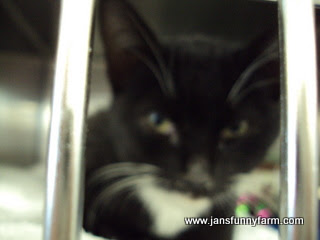 This shot isn't very clear but we included this little tuxie because it looks like a young Cameron.  Except Cameron has very dark eyes.

Well, that's our tour.  We're not paid tour guides. We're just letting you know what a Petsense is.