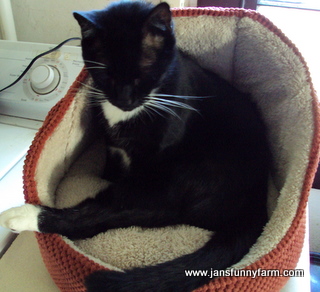 Cameron:  It's my turn to introduce the subject for today.  We want to tell you what we learned about a product on the market.  This isn't a review of a product, just a review of what we learned on the subject because several of those we asked for input before testing it the other day have asked whether we accepted or turned down the offer.  So here goes. Hope it makes sense because Jan is rushing to get to a meeting and we're not supposed to play on the internet when she's not home.  (Ha!)


Many of you have seen this recently -
I have invented and patented a new cat product. I need to find a devoted cat blogger to help promote my product ...


We won't name the individual or his company as we are not writing this to endorse his product, publicize it or even to slam it. but the idea is to use ground tires as cat litter in a specially designed/built litter box because tires are not absorbent.

Jan was cautious but interested in testing it to see if it would be something that could help us with some income. but then she saw this warming from PDX Pride -
Please be careful, kitties! ... “environmentally safe” recycled tire cat litter is misleading! Please do some research about this. Even playgrounds & fields made out of crumb rubber (as it’s known) may have high levels of toxic chemicals such as lead. In 2008, there were major studies done, and a lot of states quit using the crumbled form without reformulating it into a sheet. Car tires are also NOT “organic” or “carbon-based”, as the website claims. They are petroleum-based.

So she googled crumb rubber and could not find anything good on the subject. She emailed some bloggers and non bloggers to ask for their feedback. But Karen, mom to the PDX Pride and daughter of a retired Oregon Health Department worker, sent us this easier to understand explanation.

I applaud him for coming up with another use for recycled crumb rubber, and on the surface it looks like his idea would work, if not for using recycled tires.  Since he's going by the claim on the bag of rubber that he gets, I hope he's done his research on that claim.  There are two meanings to the word "organic".  One is the chemical meaning:  produced from carbon-containing components.  In that meaning, vulcanized rubber of any sort is organic.  The other is the environmental meaning:  produced without the use of chemicals.  In this meaning, NO vulcanized rubber is organic, especially not any that has been used as tires.

No method of recycling used tires can fully wash off oils and other road contaminants.  These are absorbed into the rubber of the tire.  Furthermore, tires are manufactured from raw rubber (an actual organic component), chemicals (varying by manufacturing company), and steel wire (mostly taken out when recycled).  So, chemicals are inherent in the rubber of the tire from manufacturing as well as what is absorbed through use.

However, if the rubber that he's getting is from a source that uses ONLY raw rubber or vulcanized raw rubber, then that would be safe for cats.  But recycled tires contain chemicals that I wouldn't want around my cats.

Jan asked him which type of rubber he is using, raw or vulcanized raw rubber and he answered that the guy who grinds it uses both and it would be "mixed." As far as we can assess, this isn't possible.

So Jan passed on testing it or helping to sell it. Our welfare is important to her!

If you have been contacted and are interested in trying the product or helping to market it, we aren't trying to dissuade you. We just hope you will check into the safety aspect of it for your kitties first.
Pawed by Jans Funny Farm at 11/09/2010 06:21:00 PM