Hi, I'm Cyndi and I get to introduce the after Thanksgiving post. 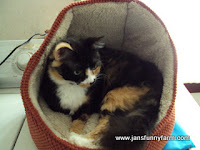 Jan says Thanksgiving was a very good day. Well, maybe it was for her but we were left alone for most of the day and she still hasn't shared any turkey tidbits with us. She says they're coming as soon as she can catch her breath.

But we might forgive her.  We did have a bit of excitement here this morning.  We cats watched from inside the screen door as Jan raced outside.  If anyone reading this drove by early this morning and was shocked awake at the sight of Jan bent over, back to the road, in her pajamas, we hope you didn't spill your coffee.

She opened the door and the 3 dogs charged down the steps as usual.  It surprised her because Buddy stops dead and refuses to go outside if it's rained or is too cold first thing in the morning, but then she realized Buddy was in trouble.  So, cool-headed and clear-thinking as ever, she started to run through the house to pull on a pair of jeans, realized it would take too long to get dressed, grabbed a jacket on her way back and ran outside to comfort Buddy who was having his first seizure of the fall/winter season.

He generally takes a few minutes to come out of it, gets to his feet and has to make an emergency trip outside (this is the first time he has had one outside) to empty his bladder and bowels.  But before any of this could happen, Merci suddenly ran for the fence, barking, Squirrel, squirrel, squiirel!.Buddy, who was on his side with his legs rigid, shot straight up in the air, came down on 3 legs, nearly fell over, and kind of hopped, staggered the few feet and stared, probably not seeing anything.  At least not a squiirel, which had disappeared. Then he turned and started staggering, stumbling along the fence toward the house.

Sam gets upset when Buddy has these episodes. He usually races around barking in Buddy's face.  When this was over, Sam went crazy racing around, barking at Buddy, slapping him in the face with his tail, body slamming him with his brick butt (Jan's nickname for him), and trying hard to get Buddy to play. We're all glad Sam decided not to be a physician. His bedside manner could use some work.

We're happy Buddy is okay and things are back to normal.

We'd like to share a happy video with you this morning.  Roo is a Chihuahua mix puppy born without front legs.  He had a happy Thanksgiving - he went to his new home.  His new mom drove 2 1/2 hours to fill out the adoption paperwork and it was her handwritten letter that singled her out from the other potential adopters: She said she wants to let the puppy just be a dog and do doggy things.


If the video doesn't play, click here.  You can read the story and watch a short news story here.

Jan is cleaning today so we're going to go hide out from the noise machine. Mr. Doug is supposed to come by today to turn on our heat because it's supposed to be COLD tonight!  And it's wet out too so as much as Jan is grumbling about the price of gas, it is time.  If she really wants to be cold, we can just lock her outside.
Pawed by Jans Funny Farm at 11/26/2010 01:48:00 PM