Today is Veterans Day in the United States and Jan celebrated by attending the local ceremony at the courthouse. She said we can share some of her photos, including one you aren't going to believe. We actually convinced her to have someone take her picture today and she has given us permission to publish it. Yep, her first public photo. 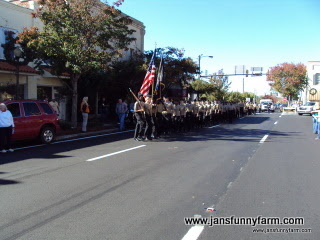 This is the Color Guard leading the Upson-Lee High School Navy JROTC . 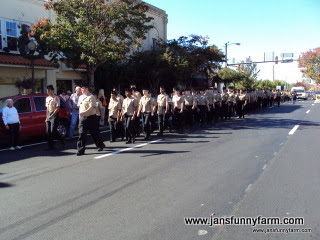 The Color Guard has veered off and headed toward the podium.  The rest of the group will line the street behind the veterans and onlookers in attendance. 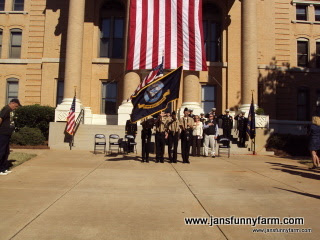 Here is the Color Guard again. 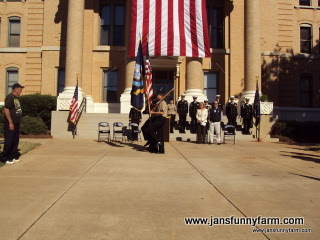 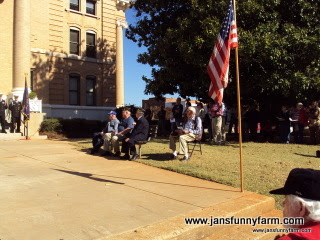 Most of the attendees stand, but a few of the older veterans have a seat. 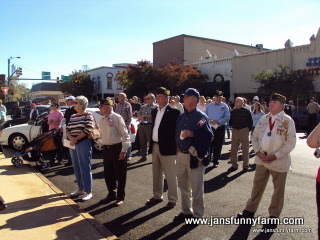 If we understand correctly, the 5 humans in the first row in this photo include one LAVFW (Ladies Auxiliary VFW) state officer on the left and several veterans. The local post Cdr is in the middle and the past post Cdr/current Jr. Vice is on the right. 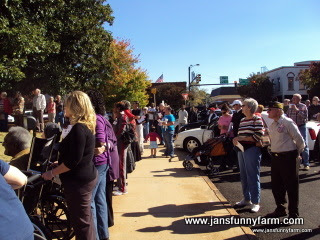 The gentlemen on the left in wheelchairs are veterans who were brought from a nursing home for the ceremony. 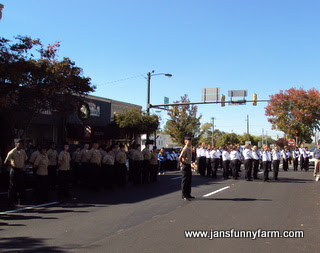 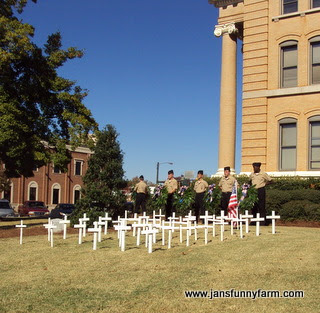 This is the beginning of the wreath laying ceremony. Each cadet is assigned to lay a wreath for one of the following groups - 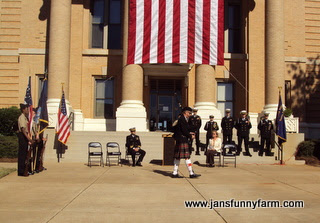 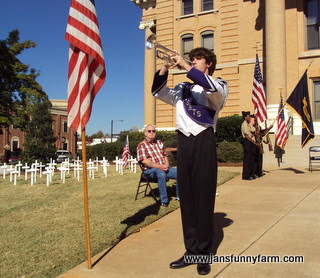 A member of the U-L HS Marching Band played Taps to close the program. 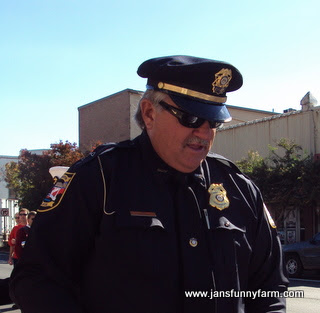 
And the photo you've all been waiting for - Jan's internet debut. 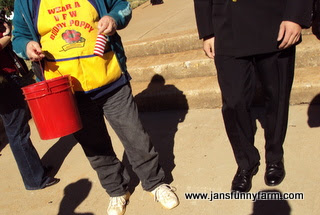 Yes, that is Jan with the yellow VFW apron and a bucket of Buddy Poppies and the little American flag.  She asked a bystander to take a photo of her while the veterans gathered for a group photograph.  There were a lot of people moving about and we figure someone must have jostled the woman's arm when she snapped the photo.  For some reason Jan thinks this headless picture is the best shot ever taken of her.   And, honestly, we didn't crop her head out. 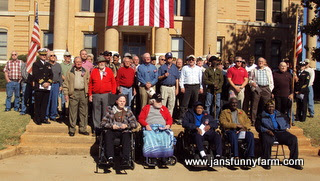 And our final photo, after the ceremony ended the veterans assembled for a group photograph.  We applaud every one of them for their dedication and service.


UPDATE ON KITTENS: Josh, the Petsense manager, left us a comment today regarding the kittens with the respiratory illness that are up for adoption. "The kitties have been taken to the vet for evaluation. We should have them back soon." We were really worried the shelter would just take them back and .... we don't want to finish the sentence. If you missed the kittens, you can see them here.
Pawed by Jans Funny Farm at 11/11/2010 03:27:00 PM