There's a little disabled guy with a real will to live.  Born with only 2 legs, one lamb's determination won the heart of the owner who would otherwise have killed him at birth  Funny thing is, he's the only one who doesn't know he's disabled.

Sheepish Cui, 38, says she would normally have killed the youngster at birth, but was so impressed by his struggle to survive she began to hand-rear him.

‘He was so determined to live he pulled himself up onto his own two feet and started drinking his mother's milk. I couldn't let him die,’ said Cui at her farm in Shangdong province, eastern China. You can read the rest of the story here. 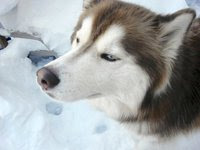 For those of you who haven't heard the story of Bear Bear yet, stop by Khyra's or Meeshka's  to read his story. And then while you're all hot under the collar, get your humans to use the contacts listed to help get Bear Bear justice.  There are too many law enforcement officers of one type or another who are trigger happy when it comes to animals, often killing a pet in front of family members with no provocation or remorse.  They should be held accountable!  The investigation was reopened after a "flood of outrage" over the shooting.  You can read that story here.

Don't forget to stop by the CB auction for little Miri.  The anonymous donor who matched the bidding total for Maxie's last auction has offered to match the winning bids for Miri also. You can visit the auction here.
Pawed by Jans Funny Farm at 8/05/2010 12:05:00 AM