We seriously believe this "friend" deserves a swift kick in the pants by a hulking human. He would rather let the dogs his friend serving in Iraq entrusted to his care be killed than to divulge the name of his "friend" so he can be notified his dogs are safe and where they are. What a scumbag, a word we keep hearing on police shows. A definition of scumbag, by the way, is: A person who is deemed to be despicable or contemptible.

Arizona - Despite being entrusted with the dogs' lives by a man off serving his country, the friend chose to turn the 2 dogs over to the Pinal County Animal Care and Control, rather than finding the dogs a guaranteed safe haven.

Boulder Falls Pet Resort wants to see the dogs reunited with their true owner and is currently housing them for free until every effort has been made to make that reunion possible. The rescue volunteers desperately want to contact the deployed soldier to let him know that his dogs are safe, and that they will be held until his return, but they have no way to contact him. 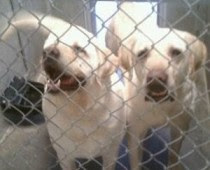 Yellow labs, Wyatt and Storm
The dogs are approximately 2-4 years of age, one male, and one female. One dog is named Wyatt and the other is named Storm.  If anyone has information about the person that owns Wyatt and Storm, they are asked to contact Rhonda Wagner Kuehn at Helping Orphaned Hounds at 406-697-5975..

You can read the rest of the story, "Soldier's dogs surrendered to AZ shelter - public help needed to facilitate a reunion" here.

We hope someone recognizes the dogs so their owner can be notified. What a horrible thing to happen while he is overseas and unable to do anything to rescue his dogs, possibly not even knowing they were dumped at a high kill shelter.  Or if he was notified the dogs were dumped at the shelter, he has no idea that strangers care and have rescued his dogs for him.  We send lots of purrs and tail wags that Wyatt and Storm will be safe and waiting for their owner to return for them.
Pawed by Jans Funny Farm at 8/31/2010 10:40:00 AM