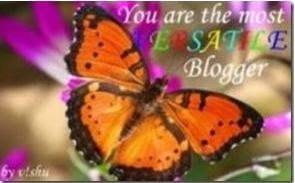 We would like to thank our friends at the Animal Shelter Volunteer Life blog.for passing on this pretty Versatile Blogger Award to us.  According to the rules, we have to tell 7 things about ourselves.

1) Cotton - I'm a tortie and the oldest jff resident since we lost Crystal this year.

2) Merci - Before Buddy and Sam came along, I was a cat magnet. They followed us when I walked Jan.

3) Cyndi - I spent several days living in Mr. Doug's engine because his dog was hunting me.

4) Percy - I was originally named Birdie because I sounded more like a bird than a tiny kitten.

5) Cameron - When my siblings were adopted, Merci became my best (and only) friend. So I moved in with her and the funny farmers.

7) Rusty - Jan spent their money on adopting me instead of on Thanksgiving dinner for her and her mother.

We're going to wait to pass this on. It's kind of late and we're being kicked off the computer now.