Crystal and Buddy are going on the Hams of the Werld Tour. They will be teleporting over to Auntie Deb's where Miles Meezer and Victor Tabbycat will be their tour guides. And they'll get to ride in a wiener mobile. We all wanted to go but Jan said we should be polite and only send one since we're kind of overwhelming en masse. And then Miles asked if one of our woofies would like to go too and Buddy woofed first, so he's licking his chops and packing his bags now. 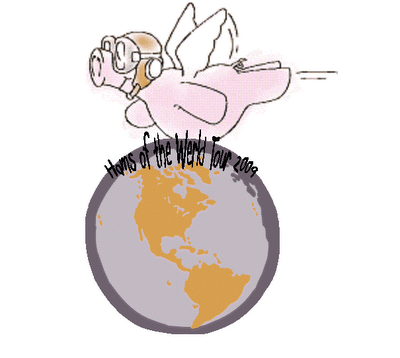 We left these instructions for Miles:
Whatever you do, don't let Buddy do any backseat driving while Sammy is going eleventy seven miles an hour. Last time he gave driving instructions, we drove Jan's car into our bushes. It wasn't exactly his fault, though.

We hope they have a good time and take lots of pictures and bring us all home some ham! And we're all chipping in our cheezburger money in case Sammy gets a flying -- um, a speeding ticket.

Stop by Junior & Orion's. They're raffling a lovely kitty-design quilt with a ruffle to help some of their needy blogger friends. It's for a good cause and only $4.

If you read this blog, you're aware of the "difficulties" we've had with Merci trying to participate in the Cutest Dog Competition. We have just given up on it, as have our voters who either gave up after numerous frustrations trying to vote or backed out when the rules were suddenly changed and voters had to register. Many don't want their names and email addresses mass collected. And we can't blame them.

But we've had a nice message from Erin:

We recently launched “Don’t Blow It,” an online game that teaches people about nasal allergies. The game stars Ronnie Nose – a cartoon nose with nasal allergies – and also features a loveable dog character. To date, the dog has gone without a name. We’re now asking pet-lovers to name Ronnie Nose’s Dog.

Contest runs from August 3 to September 11, 2009 Enter by submitting a creative name at nameronniesdog.com One winner will receive a $500 gift certificate to FetchDog and have his/her name featured on the “Don’t Blow It” game Two runners-up will each receive a $250 gift certificate to FetchDog For every new person who plays “Don’t Blow It” a low-allergenic tree will be planted through American Forests.

We ran across this recently on Twitter and named Ronnie Nose's Dog then. Whether the company will like the name is yet to be decided. But we think it's cute, so we're hopeful.
Pawed by Jans Funny Farm at 9/02/2009 09:53:00 PM