Back in mid-May, at what we then thought was a low point (ouch, if only we'd known what else would be happening around here), we received a package from Ginger Jasper and his mum in the United Kingdom.  It cheered us to know someone was thinking of us, so we opened it and found -

Pictures of GJ.  The one on the left is a magnet and the other a card. They are both posted on our fridge. (You remember Mr. Nekkid Cold Box?  Well, he hasn't been nekkid since some of you helped dress him a while back.) 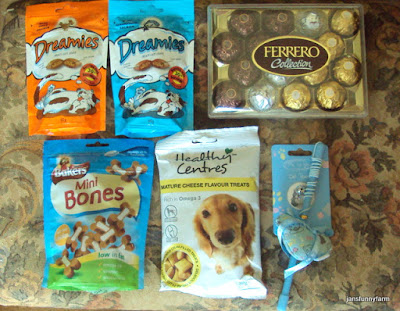 There were some edibles in the package for all of us.  A bag of salmon and a bag of chicken Dreamies for us kitties, plus a fun toy.  Mini Bones and cheese flavour treats for us woofies.  Oh, and on the upper right is a box of melt in the mouth chocolates.  Or so we were told.  Not even a teeny morsel had opportunity to melt in any mouth other than Jan's. 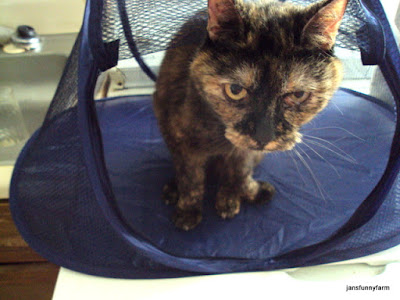 There was also a pop-up pet house which Cotton immediately claimed as her own.   (This is the last photo taken of Cotton.  She passed away 3 weeks later.)  She really loved the net pet house.

Thank you so much, Ginger Jasper and Mum Carol.  We have enjoyed what you sent.  And your timing was good too.

The last few months have been hard and we've barely posted, so today we had a complaint (their word, "complaint") from Au, Target & Guido: "We haven't seen pics of all of you in AGES! Pleeeeease."

Okay, for all 3 of our adoring fans, we'll post a couple of photos today and try to get Jan to take some new photos of us soon.  She takes them at the shelter but acts like her camera is broken around here.  We'd whine that she doesn't think we're photogenic but we know it's because the shelter animals have such a short time to be adopted or rescued, so they take precedence.  But, still, this is our blog and some photos of us would be nice. 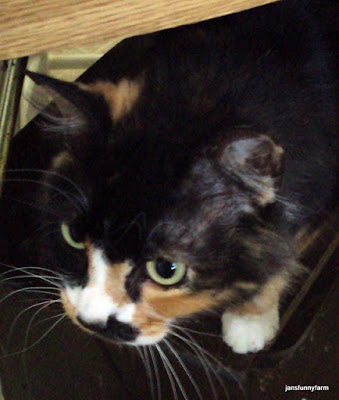 This is the lovely Miss Cyndi peeking out from a chair under the table. 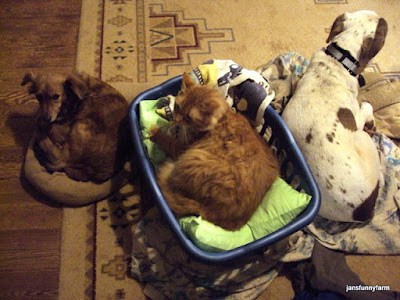 Here we have Merci, Rusty (in basket bed) and Sam. The reason you're looking at their butts instead of their faces is because Jan was too lazy to walk around and photograph the correct end. But Au, Target & Guido merely asked for photos.  They didn't specify which end should be in them.  (Technicality.)

If you haven't stopped by to read the Funny Farmer Felines' Mousebreath interview with Nicki & Derry of Fuzzy Tales, we hope you will do so.  We will have a new interview posting Friday.