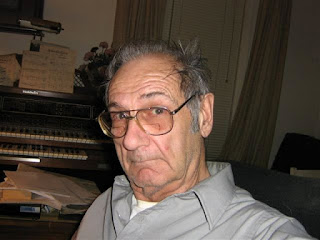 This is the first photo we have of our friend Bill Walker.  We met him on the internet a few years ago after he published a book of stories on his "angel" Pekes Tinker and Poo.  He sent us a copy, which we treasure.  We wrote a post for him, The Funny Farm Meets Tinker and Poo. 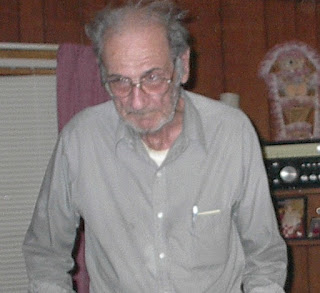 This is the photo we received before he entered Beatrice Manor.  His last Peke rescue, Little Girl, lived there with him. The Manor promised to take care of his old girl when he passed.

Bill was an interesting guy.  He loved God, country and animals, believed in honor and integrity and was a knowledgeable history buff.  His spelling and punctuation might have been lacking but his character and heart shone through in the stories he wrote.  Some of his most popular were his Rainbow Bridge stories.  Whenever someone he knew lost a pet, he wrote a special bridge story to comfort and encourage.

We were honored to have two written for us.  The first was when Jan's brother lost his dog Fraggle, a dog Jan helped rescue - Rainbow Bridge Gang, Fraggle.

The second was when we lost our orange boy Crystal, Crystal Came Home.

Well before our Cotton passed away this June, Bill's health and strength had gone downhill and he no longer spent time on the internet or wrote stories.  We were saddened at the knowledge Bill wouldn't be writing Cotton's bridge story.

We were fortunate to have had the opportunity to know Bill, even if only via the internet and email.  He was a storyteller who ranged from true personal experiences to history  to his imaginative writings of life after death for pets.

Bill passed away last Friday, July20.  He will be buried with military graveside honors today.

Farewell, Billy G. Walker. We have missed your emails and stories these last months, but there is one who is missing you more than anyone - your best furry friend Little Girl.  We will be sending her lots of purrs and pawhugs until you're reunited.