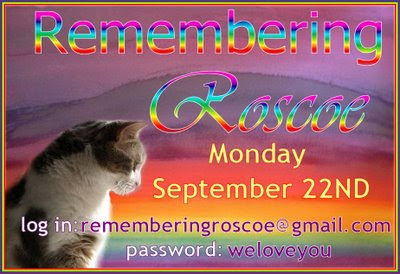 Monday would have been Opus & Roscoe's 13th birthday celebration. Unfortunately, Roscoe died last week, so Opus is holding a wake in celebration of his brother's life. Everyone is invited to participate with memories, photos, a card or a poem. You can read about the details on Cat Naps in Italy.

**********
We finished a book a couple of months ago that we were supposed to review but, unfortunately, we found it buried in the to-do pile, so we’re a little late. Since all the others blogged on it a while ago, perhaps someone new will read this late one. We hope so, because then we aren't late, we're on time.

The book is Under the Paw: Confessions of a Cat Man by Tom Cox. It’s published by Simon & Shuster UK.

First of all, if you think this is going to be one of those cutesy stories of baby talk and snuggles, you’ll be disappointed. It’s written from the point of view of a man, specifically one who seems confused as to how he ended up becoming a cat person. But then, many would be confused too, if their first major adult encounter with a cat was with a pseudo psycho one named The Bear which belonged to a girlfriend’s ex.

Tom tells about his male cat named Janet (so named by mistake), Monty, Shirley, Ralph, etc. As you can probably guess, The Bear comes to hold a special place in his heart. Such is the magic of a feline’s wiles.

Team Tabby graciously gave us a couple of awards.