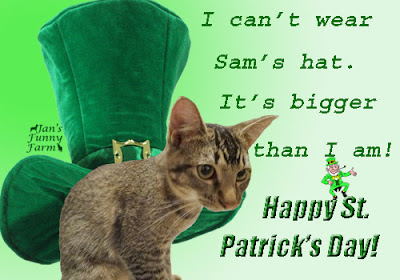 TAYLOR:  Hey, whose idea was it to bring me one of Sam's old hats to wear?  His head was bigger than I am!

BUDDY:  Don't worry.  It was just a joke.  We asked Jan to include you in our post today since we're using a graphic from 2014. 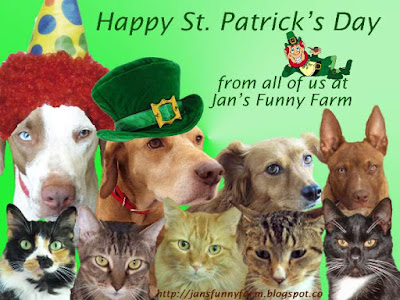 TAYLOR:  Sam was sure a character.

BUDDY:  Yes, he was usually wearing the wrong hat for the occasion but we had a lot of fun teasing him about it.

TAYLOR:  Cameron the Tuxie left for the bridge a few months before I arrived, but I've heard he and Sam were well-loved by all of you.

BUDDY:  You weren't here long enough to get to know Sam's sense of humor.  He was always making us laugh with his silly faces.  Marcus is trying to fill his shoes ... er, paws now but he's a different personality type.

TAYLOR:  Marcus is a different everything. I think his brain is filled with confetti so his personality changes as the different colored confetti shifts position.

BUDDY:  I never thought of it like that, but you might be right.  Let's hope his green confetti has shifted to the front of his brain for the day.

MARCUS:  Hey guys, are you ready for the wearing o' the green today?  I am.

TAYLOR:  Look at him strut out of the room.  I do believe one of these days his brain is going to explode confetti all over the place.

BUDDY:  I hope he doesn't do it in the kitchen while I'm eating.

And Ruckus the Eskie for Thoughtless Thursday with co-hosts Love is being owned by a husky and Barking from the Bayou.
Pawed by Jans Funny Farm at 3/17/2016 12:30:00 AM