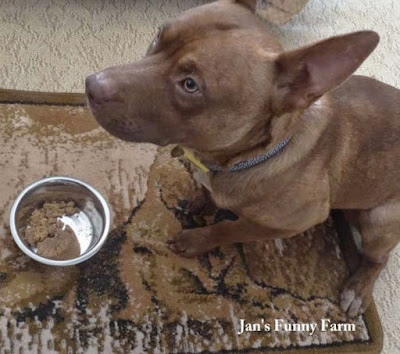 CYNDI:  Today we're going to tell you why Marcus loves to be served meals in his private dining car.

MICAH:  You might remember this photo of Marcus waiting for the word to eat his breakfast.

MERCI:  He guards his food like it's going to disappear if he blinks.  No one is allowed near it.

BUDDY::  Marcus can be been food aggressive, so he eats in his private dining car when Jan has to take pictures of us dogs with food for a review. 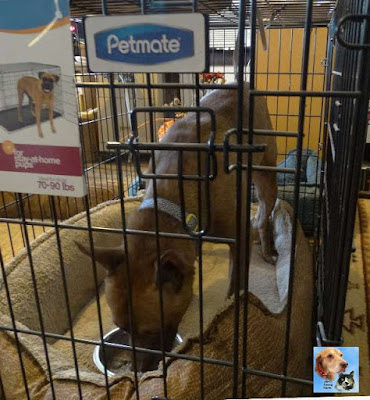 PERCY:  Now Marcus is asking Jan to allow him to be served all his meals in his private dining car.  Why?

RUSTY:  Buddy is a hound.  He likes to yell a lot.  Now that he's older, he likes to yell just for the pleasure.  When he yells, Marcus races to yell back or to yell at whatever Buddy is yelling at.  It can get extremely noisy in here, even in the middle of the night.

MERCI:  Yesterday morning was one of those times Marcus growled as he ate.  There was no one anywhere near him but he munched and growled through the beginning of breakfast.

MICAH:  That might have something to do with what has been going on around here lately.

RUSTY:  Buddy recently put on his thinking cap and devised a way to eat one and a half dinners each day.  He cleans his bowl and leaves the room.  Shortly, he will start yelling at the top of his lungs.  Marcus races out of the room to join whatever is going on.

TAYLOR:  Buddy and Marcus pass each other in the kitchen doorway.   Marcus races around yelling, finds nothing is going on and returns to the kitchen to find Buddy licking his bowl clean.

BUDDY:  Now you would think Marcus would learn but he keeps falling for that.   The only time there is a confrontation is when I get ahead of myself and pass him at the table instead of in the doorway.  He starts a fight, Jan yells at both of us, and I go polish off his meal while Marcus watches.

MARCUS:  And now, if you didn't know before this, you know why they live on the Funny Farm instead of someplace named Shady Oak or something peaceful..

PERCY:  You mean why we live on the Funny Farm, Marcus.  You're just as loony as the rest of us.  That's why we love you.

MARCUS:  Well, I got the best of Buddy last night. He tried that trick again but he was too late.  My bowl was empty.