One morning there was a deer in a yard frantically looking for something in a pile of rocks that form a wall on the property line. When the owners first went out, they didn't see anything but the deer wouldn't leave the yard.

Later they went out to the area the deer was concentrating on and heard a fawn crying. They moved some large rocks and saw the fawn was trapped. The large boulders were too heavy to move.

They called the fire department and a team came out and moved the rocks with the Jaws of Life, then reached in and pulled out the fawn.

This is a neat video and we'd like to send  kudos to the B Shift team of the Clark County Fire District 3 for reuniting the fawn with its mother.


Today is Asta's 5th birthday.  We are trying to get to the party on time with some friends but we're stuck in a taxicab traffic jam. 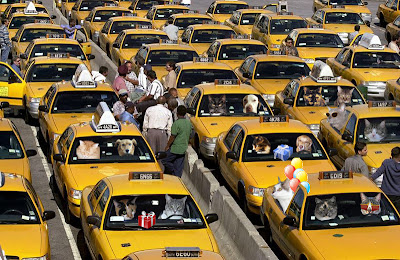 Don't miss Asta's 5th birthday party.  She's having a commentathon and will donate 50 cents a comment. She will draw a winner's name from the comments who will get to pick which rescue/shelter will receive her donation.

Just a reminder that Gracie's mom has sinusitis and pneumonia in one lung and can use your prayers.  Despite her illness, she worked on the above graphic for Asta's party..
Pawed by Jans Funny Farm at 9/24/2011 11:08:00 AM