Cameron     Our first story today is from a forwarded email we received from one dog rescuer in Texas and written by another.

We hear so much negative that I wanted to give a positive post. In January Robert at PVAC (we believe this to be Palm Valley Animal Center) reached out for help in placing Nevada a Dogo Argentino. PVAC policy is that no bully breeds are adopted back into the valley. Dogo rescue helped find a foster placement for her with a related rescue Boxers R Us in Holland Michigan. With that complete all we needed was transport for the 1600+ mile drive. Again through friends of friends of friends in rescue we got a trucker doing a drive from Ann Arbor Michigan to Edinburg Tx.... And Nevada was off to start a new life. 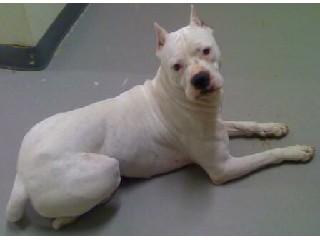 I have gotten many updates but I had to share last nights. Nevada is a bonafide HERO. She was adopted by a young couple with children and chi-chis. Last night in the early morning hours their home was broken into. Nevada sensing the danger to the family of the intruder coming in through the kitchen window took a serious BITE out of crime. The police told the couple there is no telling what could or would have happened without Nevada's presence there. Just thought you would all enjoy a positive update of what happens when we all work together.      Nancy C


We decided to include a bonus today. Must have something to do with being old because we don't get it but Jan thought it was hilarious and said when she starts doing this, it will be time to retire from the computer. Our second story is also a positive one - basically.  This is a recent story by a vet on the fact that Massachesetts was the first state to criminalize devocalization of cats and dogs this year.  We have written on this subject before and would like to see it become a crime in every state.  The negative part of the story is that anyone would ever consider such surgery for a healthy animal.  Shane on those who took the "easy way out" and had such horrible surgery performed on animals for their own convenience.  Anyone who does not want to hear a dog bark or a cat meow should not have one because just as babies are going to cry animals are going to vocalize.

Excerpts from the story (emphasis ours) -
Devocalization, also known as debarking, is surgery that either cuts or removes an animal’s vocal cords. The primary target is dogs, but less frequently, cats are ‘de-meowed’ as well.


Many veterinarians today refuse to perform the surgery for non-therapeutic reasons, because the result is strictly for the convenience of the pet owner, breeder or other caregiver. It provides absolutely no benefit to the animal and is widely considered inhumane, similar to canine ear cropping and tail docking and declawing of cats. Devocalization is no longer taught in many veterinary medical schools.


Those still in favor of the procedure claim it can mean the difference between a vocal dog or cat staying with his family or being surrendered to a shelter. However, there is no evidence to support the theory that pets are given up by their owners for being ‘too noisy.’


However, according to Beth Birnbaum of the Coalition to Protect and Rescue Pets -- a non-profit, all volunteer organization that was instrumental in getting the Massachusetts law passed -- it is not individual dog owners who want their pets devocalized.


It is dog breeders, sled dog racers, show dog exhibitors and people who collect dogs for profit or hobby. Coalition volunteers have been involved with hundreds of devocalized dogs and cats, and all but a handful of the procedures were arranged by breeders. One animal was devocalized at the request of a hoarder.

We applaud Massachusetts for stepping forward to protect dogs and cats from unnecessary pain and suffering through convenience devocalization. You can read the rest of this story by Dr. Becker here.
Pawed by Jans Funny Farm at 10/21/2010 12:01:00 PM