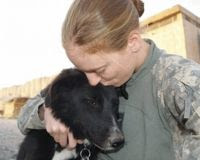 We just stopped over Ben Rotti's and followed the links to read the story of Rachet and Gwen. And after reading it, we're all primed for some butt biting!

Gwen has been serving in Iraq for over 15 months longer than her original commitment to the military. She is due to leave this month and her dream was to have Ratchet, the puppy she befriended, waiting for her at her parents' home. But as Baghdad Pups was transporting Ratchet to the airport, an unprecedented event happened to them -- Ratchet was seized by Gwen's commanding officer. The military refuses to release the dog and might shoot it in the head as it has done to other dogs befriended by servicemen and women.

Gwen is being investigated and could be court martialed for befriending Ratchet. Because she will be leaving Iraq soon, if Ratchet is not on the next Baghdad Pups transport, he will not make it out of the country to safety.

You can stop by Ben Rotti's and follow the links of the story or if you are pressed for time, you can go directly to the petition to release Ratchet in time to save his life. Under the photo in upper left, click on the button "view whole petition" so you can read the story and see the photos.

A link to this video about Jay Kopelman and his dog Lava is included on the petition site, but in case you are wondering why saving one dog is so important, we ask that you take a minute to watch the video. And then, please, go sign the petition. For Ratchet and Gwen -- and for all the military men and women who are serving their country.