CYNDI:  It was the story of our new lightweight vacuum that made such a big mess it took longer to clean up after than it did to vacuum the entire house.

BUDDY:  It was returned!  Jan has been looking for another bagless vacuum ever since.  We couldn't care less.  We like dirt! 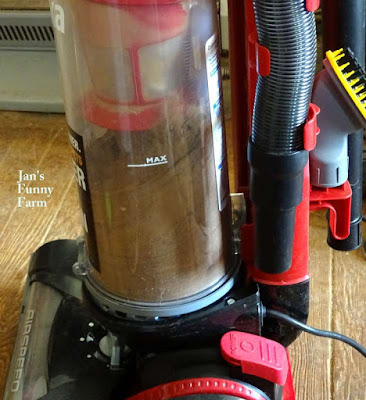 CYNDI:  She bought a new vacuum a month or so ago and returned it when she couldn't align the screws to attach the handle.

PERCY:  This is what she bought to replace it. It's a bit heavier than she would like and bulkier.  It doesn't fit under the bed or the desk or in a number of spaces she'd like to vacuum.

BUDDY:  The good news is that it has a flexible hose with a wand attachment, and our old vacuum wands fit this machine.  The hose on the other two machines were not flexible and had to be detached.  Now she just turns the dial and pops the hose from it's station.

PERCY:  See the large canister with the dirt?  She just has to lift the canister off,  open the bottom and dump the dirt into the trash can.  She doesn't have to change her clothes or clean the house.again every time she empties it.

BUDDY:  So guess what happened when she tried to take pictures?  Yep.  Marcus zoomed in for a closeup.  What a ham! 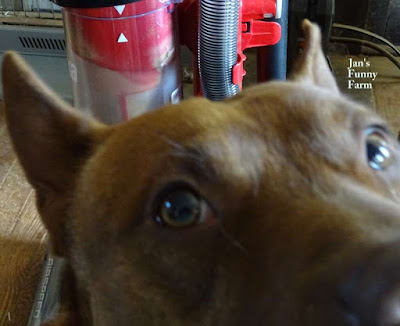 MARCUS:  I am not a ham.  I'm a model.  And if the right person sees my picture, I could become the vacuum company spokesdog. Just think, my picture on every box of vacuum parts.


CYNDI:  Marcus, you don't honestly believe that, do you?

MARCUS:  Why not?  Without a dream, I'm just another handsome face.

PERCY:  And with a dream, you're just another crackpot.

BUDDY:  When I was young I had a lot of dreams and I pursued them.  They never worked out well but I had a lot of fun testing them.  Percy, you were young then too.  Wasn't it fun to be involved in life?

PERCY:  Let's see.  We were almost arrested because you stole Jan's car.  You flooded the house when you tried your paw at plumbing.  We were almost fried when you took up TV repair.  You're right.  We had a lot of fun back then.

MARCUS:  You did all those things, Buddy?  Wow, you're my hero.  I want to be just like you.