MARCUS:  We are friends and siblings here, so we support one another.  But when a competition begins, we go all out to win.  Sam and I are cheering on our canine team. 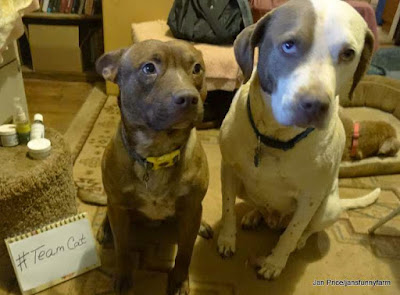 SAM:  Hey, wait, those double crossing felines switched our sign.  We are not #Team Cat.  We are #Team Dog. 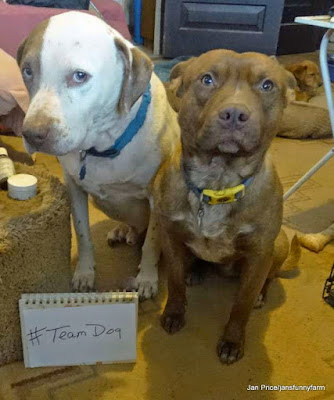 MERCI:  There, #Team Dog.  This is more like it. Seriously, we are cheering on the felines.  And vice versa. 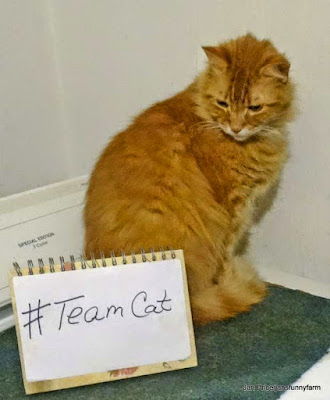 RUSTY:  Cyndi was right beside me but she took off when the camera appeared.  Guess I have to represent #Team Cat by myself.

PERCY:  I suppose you are wondering what the team signs represent.  Yesterday we posted Dogs Vs Cats Lucy Bowl  about the Lucy Pet Foundation commercial which will air on the Hallmark;s Kitten Bowl this Sunday, February 1 at 12/1c.

CYNDI:  The Lucy Pet Foundation is also having a photo contest.  Which team are we on?  Well, obviously we're on #Team Cat AND on #Team Dog.  Who do we want to win?  Why all of us, of course!

MICAH:  But more than that we would like other furries to benefit.  The Lucy Pet Foundation is named for a small dog named Lucy who had five pups shortly after she was rescued.  They all got a good home.

CAMERON:  Not every pet has that opportunity.  Many die in shelters.  The LPF has a mission to reduce pet overpopulation.

BUDDY:  Yesterday we posted a teaser video for you.  Other Super Bowl commercials are being released on video before the Super Bowl, so Lucy Pet Foundation has released a full version of their commercial.  We still don't have cable TV, so we hope this doesn't mean you won't invite us to your Kitten Bowl party on Sunday.

This post is brought to you by the rocking furries at the Funny Farm to draw attention to the Lucy Pet Foundation and its efforts on behalf of homeless pets.  LPF provided the video.  Our blog will be entered into a drawing for a chance to win a $500 donation for a 501c3 rescue of our choice.
Pawed by Jans Funny Farm at 1/27/2015 05:00:00 AM