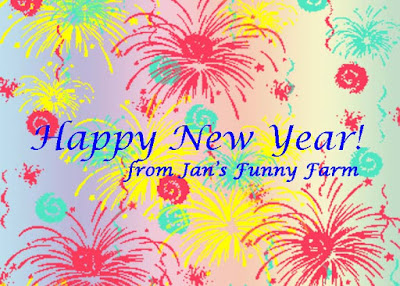 Is there good luck in multiples?  Then Happy New Year times 8.  That's how many times the above graphic finally posted.  We've been trying for 10 minutes to get just one to post and suddenly there were 8.  :)

We know 2013 has been a very hard year for many of you. A number have lost a close relative or friend - or more than one - or had a major illness in the family.  Some humans have been laid off from their jobs. So many cats and dogs have left for the bridge, including the beloved cats Skeezix and Ginger Jasper..

There have also been positive happenings:  births, travel, adoptions, rescues and other good news.  It has been a year of caring, sharing, uplifting and supporting one another.

We look forward to 2014 and hope it will be a happy, prosperous year for all. 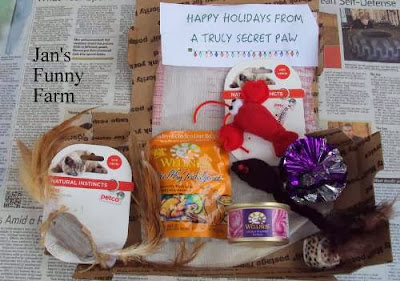 We weren't able to participate in the Cat Blogosphere's Secret Paws Christmas present exchange again this year, so we were quite surprised to receive this box from "A Truly Secret Paw."  We have no idea who sent it but so we are posting it in hopes the sender will know it arrived safely and we really appreciate it.

Jan kept trying to keep us from it until she could take a picture (excuse the newspaper but the photo was taken on our dirty porch) but Percy kept breaking into it and stealing the feathery toys. Now that it's posted, we can have the contents.  Whoopee!


Puffy has been blogging since October and would love to make lots of new friends.  If you'd like to meet this cutie - sorry, this handsome tuxedo cat, stop by his blog, keep calm and catch a mouse-a day in the life of puffy.