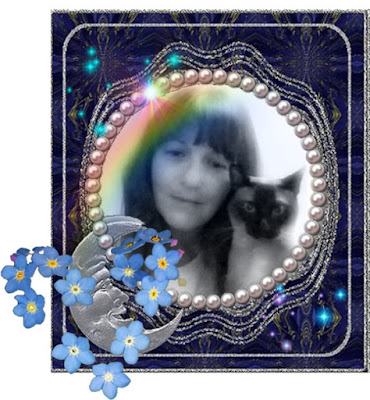 We enjoyed the Rocky Mount Meezer blog which was written by Jan Struckhoff. She hasn't been posting much for a long while but last night the news came from Facebook that Jan died very suddenly Thursday, leaving behind a husband and three cats - .Sabrina, Sam and Simon. 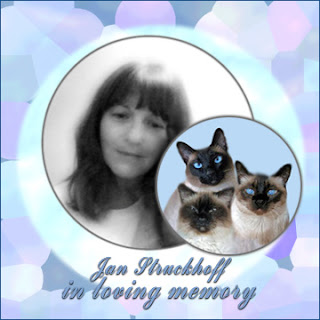 You are welcome to use either or both of the above graphics.  Ann and Karla made them and are sharing them.

There is no post on her blog and there likely won't be but she was a part of the blogging community and we'd like to honor her life with a post.  Her family and friends are remembered in prayer.

Jan was upbeat and happy, but according to Facebook posts she was depressed and hid it very well.

We mention the last statement because the past couple of days there has been some controversy on the Cat Blogosphere. (We're not going to mention name or blog.  That's irrelevant to this post.)  It's not the first time and likely won't be the last, but usually it's because someone gets their feelings hurt, lashes out to hurt the feelings of others, can't be reasoned with, and won't apologize. .

With the news of Jan's death, our perspective on the controversy changed.  Is it possible that when the blogging controversies occur, the upset person is depressed, discouraged, scared of something happening in their own life, perhaps having a pity party because they feel overlooked or an outsider?  When Jan gets discouraged, she sometimes gets .... hmmm, how can we put this?  Ah, the "itchy" word - witchy.

We hope the CB controversy will end on a positive note because Mog is doing her best to cope with learning a new job after being conscripted while ML is on hiatus.  And none of us intended to ignore or hurt anyone's feelings.

We wonder if the CB problems arise as a cry for "help" because the angry person is discouraged and needs a hug and some positive attention?  (We're asking, not making a statement.)  If so, which response to negative emotions gets the best results - to hold everything inside and pretend everything is fine or to lash out in anger?  Neither works. We lost two bloggers in one day - .possibly one to each extreme.  Both are loved.

If the one wants to return to the CB at some point, we'll welcome her back.  After all, we are here to support one another during good and bad times.  Forgiveness is part of support.

But Jan Struckhoff, we will miss you.