We have mentioned before that there is a crew working on reclaiming a local mill.(Tearing some of it down, reclaiming whatever possible for other uses.) Just recently we posted on the Doggy Christmas Surprise that Matthew, the project manager, and Drew, the supervisor, gave the 3 of us dogs. We haven't quite figured out what we're supposed to do with it yet. Jan imprisons us in it, then usually disappears into the house. It's very boring in there alone. We dig for pecans, watch the traffic and bark at passersby. Buddy is working on a plan to get over it so he can climb the tree after the squirrels.

We are in agreement that Jan should be imprisoned with us, not just checking on us every few minutes. Eventually she realizes that and comes outside to join us in prison. Then we run, play tug, Merci jumps on her, Sam body slams her, and we dogs get lots of exercise. Jan just stands there holding our leashes while we have fun. Guess Jan just doesn't know how to have fun. Maybe we should get her a tug toy for Christmas.

Oh, we got a bit off track. We started to tell you about the star of Martha Mill, which in past years could be viewed from Thanksgiving through Christmas. No one seems to know how old the tradition was. The oldest man living who worked at the mill started there in 1937 and there was no star then. There is a photo of it that was taken in 1989. It was last put up in 2004.

This year Matthew worked with the local archivist to revive the Christmas star. Jan knew Matthew intended to light it, but she didn't know when. It debuted Thanksgiving eve. It was startling when seen from a distance for the first time, like a beacon of hope in the darkness. If it hadn't been for us dogs having to pee that night, Jan would have missed it. We hope she realizes how fortunate she is to have us to show her the sights -- and to keep her company on her picture taking jaunts. It's not easy to take a good picture in the dark, especially when handicapped by hands shaking from the cold. Good thing she had the 3 of us leashed to her to keep her hands steady.

Here are a few of the pictures we helped Jan take. Oh, and Penny, Jan fibbed last night. She did come home to get her camera to take some new shots.

This is a photo we like. The star appears suspended without support. 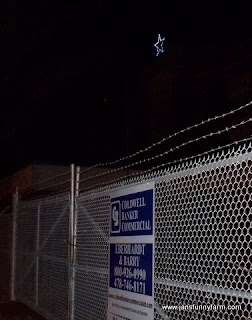 Peekaboo. Through the branches of a tree. 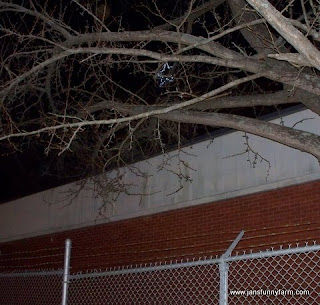 The star shines clearer from this angle than from head-on. 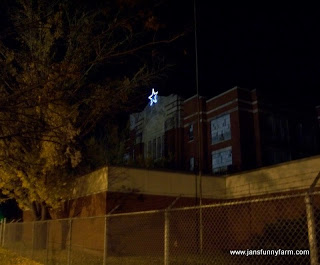 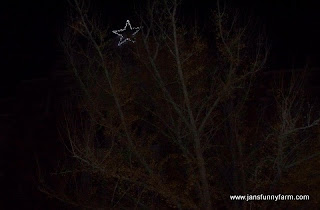 Here is the star under a full moon. 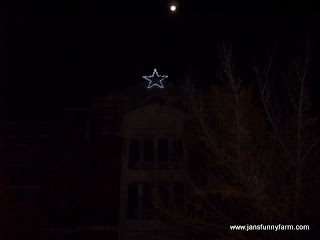 And a shot from across the street. The overhead branches make it look eerie. 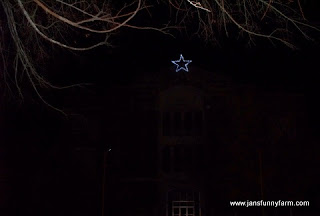 Thank you, Matthew and crew, for being involved with and giving to the community.