Merci: Jan is on the warpath. I'd hide if I were you two.

Merci: Someone stole her rolls. 9 of them to be exact.

Sam: I'll take a look around for them. Where did she lose them?

Merci: On the stove. She baked a dozen rolls. She ate three. When she went to put the rest away, she found this. 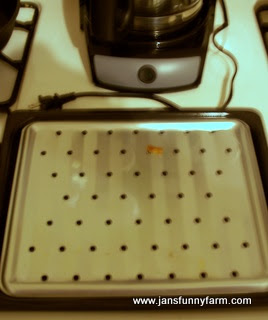 Sam: That looks empty. Except for a crumb. Can I have it?

Buddy: What do you think happened to them?

Merci: I think one of you two stole them.

Buddy: What makes you think it was one of us? What about you ... or the cats?

Merci: The cats would have taken a bite or two and left evidence behind. I'm too short to reach the stove. That leaves you two as the only suspects.

Buddy: Don't look at me. I could be innocent too. Why am I the one that always gets blamed when something happens?

Merci: Because you're usually responsible for whatever happens. And besides, you have a history of stealing Jan's food.

Buddy: Name one time I ever stole Jan's food!

Sam: You stole the top piece of bread from her sandwich once.

Merci: Twice. And you ate the cheese Jan grated for an omelet.

Buddy: I said to name one time. Besides, she shouldn't leave food where I can eat it.

Sam: Buddy, you steal right off her plate. Jan has never fed you at the table. And you counter surf looking for crumbs.

Buddy: But that doesn't mean I stole food off the stove. It could have been a burglar.

Merci: A burglar that breaks in just to steal 9 rolls? Buddy, give it up, you've been busted. You stole those rolls. Admit it.