Cyndi:  Marcus, settle down!  Stop running in circles and squeaking your toy.  Show some respect!

Micah:  No, Jan's not sick and some of her marbles are still missing, but we're attending a memorial service today in Sparkle's honor.


Rusty:  It was a shock to the blogosphere that she left us so unexpectedly.  She is greatly missed.

Sam:  Everyone knew Sparkle.  She was a writer, an advice columnist, a model ... She was a little of everything.

Cameron:  Whenever possible she helped to spread the word there was a cat in need of assistance.  She had a big fan base so she could reach a lot of people. 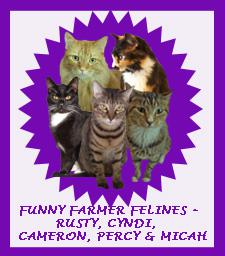 Percy:  We kitties generally interview a cat blogger for Mousebreath on Friday, but we talked it over and decided we will skip this week so we can send our readers over to celebrate Sparkle's life at her blog.  Come back next Friday for a new interview.

Buddy:  Yes, Sparkle's human is holding a commentathon memorial for her.  A dollar will be donated to Tabby's Place in Sparkle's memory for every comment left on her blog today - up to $500.  So, if you haven't already, please go by and leave a comment.

Marcus:  *whispers*  Oh, no, I'm sorry.  I'll go by quietly and leave a dollar.  Does anyone have a dollar to loan me?

Rusty:  It's okay, Marcus, you don't have to whisper.  And you don't need to donate a dollar.  If we leave a comment, Sparkle's human will donate $1 of her own money to the cat sanctuary.  But if you find a dollar and want to donate it directly to Tabby's Place in Sparkle's name, there will  be a button in the post so you can.

Merci:  We are also supporting Sparkle's memorial commentathon today as one of the co-hosts of the Pet Parade.  Please stop by Sparkle's blog and leave a comment on Celebrating Sparkle and Commentathon.

UPDATE:  We just dropped over to read Sparkle's memorial post about celebrating her life and how she made a difference.  There is a link to a post we were mentioned in but weren't aware she had written.  It brings back a flood of memories regarding a black cat Sparkle became determined to save.  We saw her plea and became determined too.

It turned out the black cat was saved without our intervention.  But like ripples spreading in a lake after you toss in a stone, our puny efforts resulted in a white cat, her five kittens and an old Siamese rescued from the same shelter.  Our rescue contact, Carolyn, named the white cat Sparkles after Sparkle whose efforts for the black cat indirectly had a paw in saving her.  If you want, take a moment to read white Sparkles' story, White Rescue Update.  It's stories such as this that make the time and effort - and even tears - invested in helping even one cat or dog at a time worthwhile. 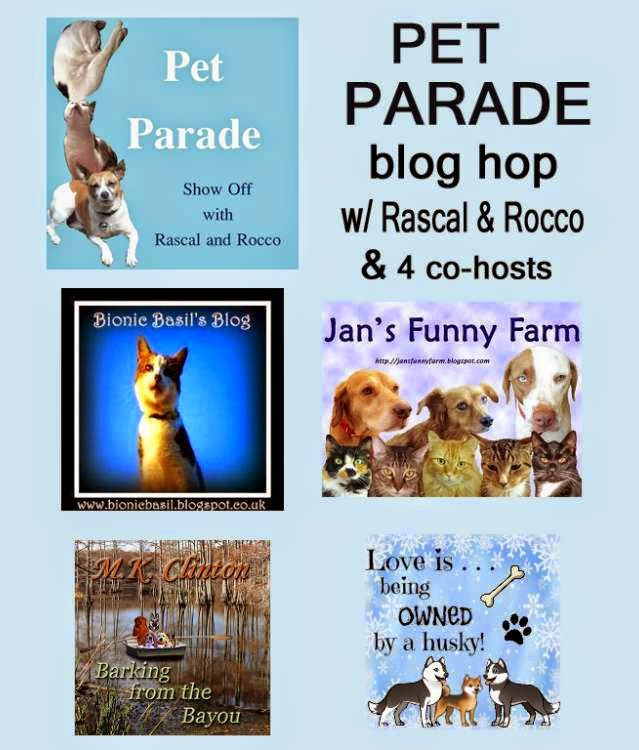 The Pet Parade is hosted by Rascal and Rocco. And co-hosted by Bionic Basil, Barking from the Bayou, Love is being owned by a husky, and us (Jan's Funny Farm).

There are two parts to the hop - your blog post link and the social media, if you'd like to enter that too.


get the InLinkz code

get the InLinkz code