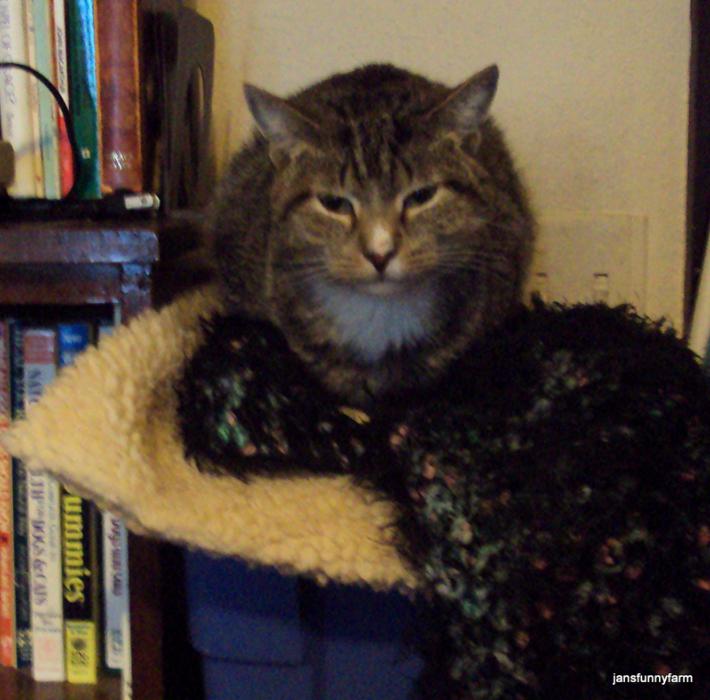 Micah:  Do you remember this photo of me?  When I first arrived, Percy hated me!  And I was so stressed from living in fear of him attacking me that I got sick and nearly died.  Jan force fed me lots of good stuff - things that were good for me, not so much that tasted good - and I survived.  Just to spite Percy, of course!  :)

After that food tasted so good, I got a bit roly poly for a short time, as you can see in this photo.  Then I slimmed down to fighting weight and now I'm a lean, mean fighting cat.  In other words, I don't hide any more.

Percy and I tolerate each other but we won't ever be best buddies.  That's too bad.  I kind of like Percy.  He's an expert typist and he's not afraid of anything.

So I thought I would do my own Thankful Thursday post today.  It's sure nice to have a home where there is always some furry to play with.  Or fight with.  It's just nice to have company.  Or not.  I can go off by myself is I want.  And there is always a food bowl on the washing machine.  It's not always full, cause Jan gets forgetful.  But I've never starved since I arrived.

I don't know what I did wrong that caused my last family to dump me, but I have it pretty good here, so it's their loss.

Oh, sorry, I gotta go.  Percy has hooked a bag of treats and is calling all of us kitties to share.

We are joining Pepi Smart Dog's Thankful Thursday Blog Hop.  And co-hosts Ruckus the Eskie and Love is being owned by a husky for Thoughtless Thursday.  Why don't you join them too?