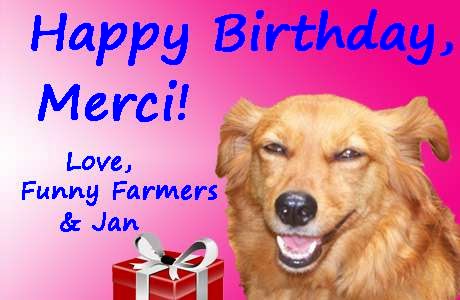 UPDATE:  Oh, dear, we did it again.  We auto published our post and forgot one of us has a birthday today.  It's actually not Merci's birthday; it's her assigned birthday.  Jan signed her out of the local animal shelter on this date back in 2003, so this is her birthday, gotcha day and prison release day all rolled into one.  We love you, Merci, and the Funny Farmers wouldn't be the same without you.

And now back to our regular post while we hound Jan for forgetting again.


Percy:  I just came across this old photo in our archives.  What did you do wrong, Buddy?  I can't remember.

Micah:  This was before my time.  I'd like to know what you did wrong, too. 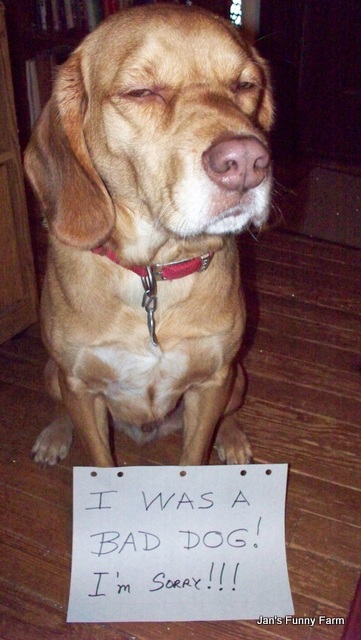 Buddy:  I didn't do anything wrong.  I was framed.

Merci:  Who framed you?

Sam:  I did not frame you!  You were guilty!

Marcus:  Does this mean every time I'm accused of doing something wrong, I have to write an apology?

Buddy:  No, Marcus, don't write any apology notes.  They'll follow you forever, even if you're innocent.

Sam:  You were not innocent. You shredded Merci's bed, scattered the stuffing and tried to blame me.

Rusty:  If I remember correctly, Sam, your excuse was you were innocent because you don't dig in bedding.  However, you have been known to eat your bedding.  Did anyone check the bed for teeth marks?

Sam:  Hey, whose side are you on, Rusty?  Did anyone check the bed for nail impressions?  I should have called 9-1-1 and asked the police department to send a nail investigator out.  He would have proved Buddy was guilty.

Cameron: What's a nail investigator?  Is he related to a fingerprint technician?

Buddy:  Yes, I believe he's a first cousin.  But I should have called 9-1-1 and asked them to send a teeth impressionist.  Or is that a tooth impressionist?  He would have proved I was innocent.

Cyndi:  That was a long time ago, guys.  It doesn't matter any more.  Personally, I think you should have called and ordered a pizza.

Buddy:  Okay, but who's paying for it?

Merci:  I think it should be whichever one of you was guilty.

Sam and Buddy:  That would be -