We are so pleased to join a host of others to write a chapter in the book, Life of Frankie Furter Pirate King of Blogville.  He looks pretty good in his pirate patch, but thankfully he is only wearing it for today.  Last month his mom had a scare.  She thought Frankie would be losing his eye, but fortunately he will not be.

Dachies with Moxie came up with the idea and you can find the list of participants on their blog.  Each chapter is written by a different blog.

In his honor, this is our pirate experience with Frankie Furter.  It's a very scary tale, so pull up a cushion and have a cutlass handly. 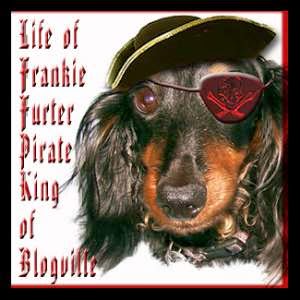 Buddy:  We heard the news that Frankie Furter, Pirate King of Blogville, is in our area and might drop by to check us out.  We are on high alert, not sure whether he is friend or foe.

Cyndi:  We hope he will be our friend, but if not, we have a cutlass aboard to defend ourselves.

Cameron:  Will one of you please explain to me how we are all supposed to protect ourselves when we only have one cutlass?

Merci:  That's easy.  We share it.  Surely he'd be fair and give us time to pass the cutlass around?

Micah:  Girls must have different rules of war than guys.  We don't stop fighting to change defenders.  We fight to the death!

Percy:  Not with a cooking knife we don't!  What kind of pirate calls a galley knife a cutlass? 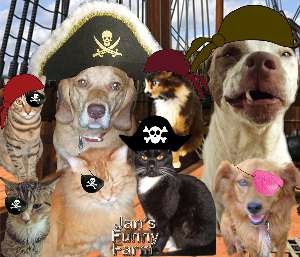 Sam:  Well, hopefully he'll be a friend and we won't need to worry about our lack of cutlery... er, weaponry.

Rusty:  *crash*  Shhh.  Did you hear that?   *crash*  There it is again.  Do you suppose Frankie is already aboard?

Buddy:  *bang, crash*  That can't be him.  A pirate king wouldn't be crashing about.  He'd want to sneak up on us and attack without warning.

Cyndi:  Who's got the cutlery knife?

Sam:  Afraid so.  Perhaps if we crowd together, we'll have a better chance of survival.

Cameron:  You're joking, right?  If we crowd together, he could decapitate all of us with one swing.

Rusty:  *moves away from crew*  Right.  Spread out now and find something to brandish for a weapon.  Merci and Cyndi, find somewhere to hide.

Percy:  He's coming closer.  If I haven't told you guys before, I should tell you now, it's been fun knowing you and I'm sorry I found Jan's hiding place and stole most of the treat bags for myself. 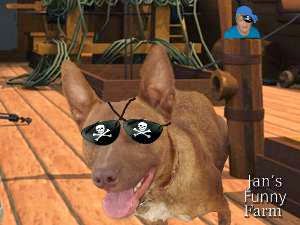 Marcus:  Hey, guys, where are you?  I can hear whispering but I can't see anything.  How did you all manage to find your way up to the deck without breaking a leg or something?

Buddy:  Marcus, I told you to go put on an eye patch to make Frankie feel at home here.  One, just one eye patch.  What goofus puts on two .... Never mind.  You gave us quite a scare with all that racket.

Marcus:  Is Frankie here yet?  Did I miss him?

Sam:  No, but we have a score to settle with Percy.  Now, what was this about stealing our treats?

Percy:  Is that what you think I said?  Fear must have clouded your hearing.  I would never!

*voice from abaft*  Ahoy, there mateys, it's Frankie Furter, Pirate King of Blogville.  I come in peace with a flagon o' rum.


You can read the next chapter at Two French Bulldogs.

On a different subject, there is a special post and commentathon to benefit Austin Pets Alive in memory of Angel Abby, who would be 15 today.  Please stop by Manx Mnews.
Pawed by Jans Funny Farm at 7/01/2014 08:28:00 AM