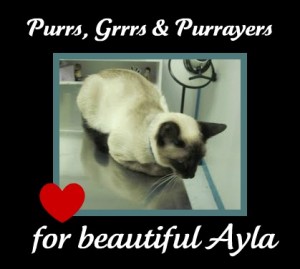 Graphic courtesy of KC of the Cat Blogosphere.
Ayla is finally home. It is unbelievable that she was improperly spayed - twice! Yesterday she was spayed for the 3rd time during a different procedure and sent home. Last night she was taken to an emergency vet bleeding badly. The Big Thing is understandably irate over nearly losing her - not to mention the expenses incurred. Evidently the emergency vet personnel have the bedside manner of Dr. Martin Ellingham, the outspokenly rude doctor from Dr. Martin, a British comedy Jan likes to watch. Such behavior is barely funny in a TV comedy..

Purrs and wags for Ayla to have a total and rapid healing. You can visit Ayla at Mark's Mews.

Many of you might have already seen this video but it's so funny, we decided to post it anyway. It was fun to watch it again and again. Gus reminds us of Buddy when he was a pup.Total determination!

We guess the weather must be sweltering where Gus lives, so who can blame him for wanting his pool indoors instead of outside.