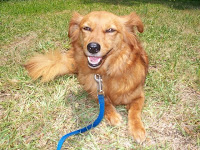 Hey, Merci here. The heat and humidity - even inside the house - make us all sleepy, so this will be short so I can catch some zzzzzzzs.

Jan has been trying for months to capture local geese on video. But they fly between bodies of water, so we don't often see them. A few times they have been close to the fence near the road, but either Jan has forgotten the camera or before we can hotfoot it down one hill, they waddle off down another and disappear.

Since it's too hot to carry anything extra - even a small camera - around all the time, Jan tried to catch them last night so she can leave the camera home. We're surprised our camera didn't pick up the loud honking.

Buddy, Sam and I wanted to look around and sniff everything. So we did. Jan couldn't tell us to settle down. The camera would have picked up her honking ... uh, voice. And if we moved around and tugged on the leash, Jan couldn't tug back. It was a perfect opportunity to misbehave. But if you notice, our behavior was above reproach where it counted most. We didn't bark and scare the geese into hiding.

And there were a lot of geese!  We didn't realize there were that many around here.   Jan only used parts of the video she took. Many were still marching downhill while those in the lead were already floating on the water when we turned to go home.

Because we were far away, we suggest you press the 4 arrows to the bottom right to view this full screen...

We know you are already aware of this news, but we wanted to say something anyway. 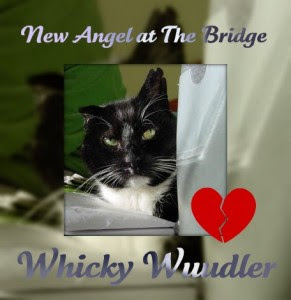 We were all shocked and saddened to learn Whicky Wuudler had to be helped to the bridge Tuesday. He will really be missed. He seldom blogged but he was involved in helping the cats of the UK and elsewhere. 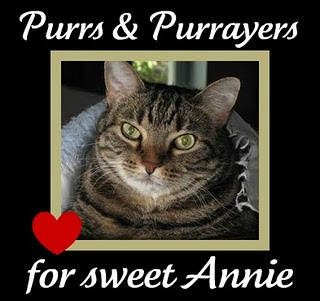 And Maw and Paw's sweet Annie of 40 Paws. We're using her purrs and prayers badge, but she was helped to the bridge Monday, shortly after her 12th birthday.