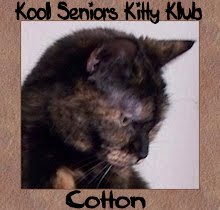 Hi, this is Cotton, the senior Funny Farmer, bringing you today's post.

Dogs are not particular about what they eat, as we cats are.  At least most of us.  Some of us eat plastic. But we read a story this morning about a Golden Retriever puppy that ate a cell phone and a small doll. He would have died without surgery to remove the items.

These are photos of the homemade candy corn cat toy Peggy sent us kitties in 2009. She is the one who makes the wonderful hairy blankies for us furries. We loved the toy. It was big and well-stuffed so it was fun to wrestle and bunny kick. 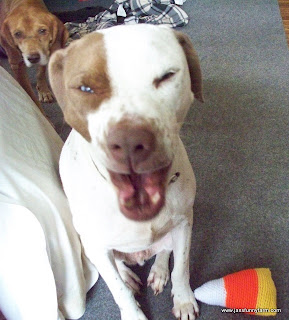 The toy looks small in comparison to Sam. 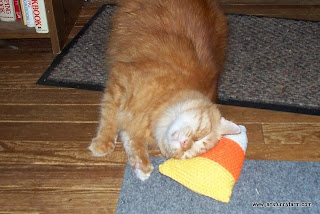 You can get a better idea of its size next to Rusty, our B-I-G kitty with the dog-size paws.

And here is Cyndi wrestling with it.

One day last June Jan stopped home for a few minutes and was racing out the door again when she noticed what looked like string hanging from Sam's mouth. He didn't want her to see it, but she pried open his jaws and took out this. 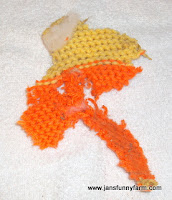 Yep, it was unmistakably a small piece of the candy corn toy. But where was the rest of it? Jan hoped he had shredded it and hidden the pieces, but, no, Sam had not only stolen the cat toy but had eaten the whole thing.

Jan was amazed that Sam still had an appetite and kept his food down, while vomiting up candy corn stuffing over the weekend. The yucky swollen, wet stuffing exited at one end and the colorful yarn pieces exited at the other.But exit they did - thankfully!

It gave Jan quite a scare. She is so glad he didn't need to have an operation to save his life. He is banned from playing with stuffed toys unsupervised but he's a big dog so he can reach places with neat things to steal, so he still manages to help himself to one on occasion. He will chew them and pull out the stuffing but he hasn't eaten any since.

And a reminder that our neighbors Friends of Pike County Animals needs your daily vote to get an adoption and education center in their rural Georgia county. They are 153rd as we type this. They started at 155 and dropped back to 165 or 166th place and have worked their way back up again. They have moved down to 140th place. They still have a long way to go but with your help, anything could happen. You can vote here.
Pawed by Jans Funny Farm at 1/19/2011 02:08:00 PM