Since a Petsense store opened in November, cats that would be killed at the local shelter are being adopted.  We stopped there Monday and photographed the new arrivals, and before we could post the photos, 4 cats  were adopted the same day.  When we dropped in Tuesday, there were 3 cats left with more arrivals due.  This is wonderful.

So if you're looking for a cuddly cat, drop by Petsense in the Wal-mart shopping center in Thomaston, Georgia. 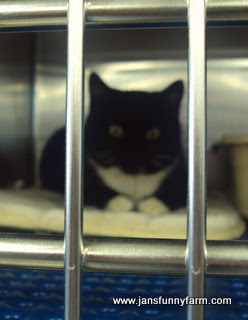 We have a cute tuxedo kitten. 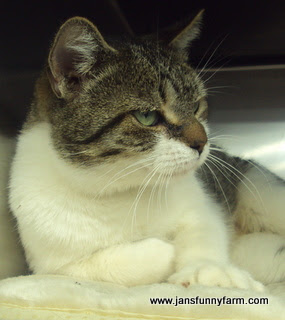 A sweet looking white and tabby. 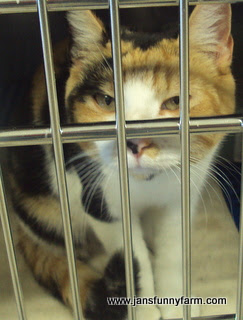 And a dainty calico and white.

You can check out some of our local available dogs on Petfinder. 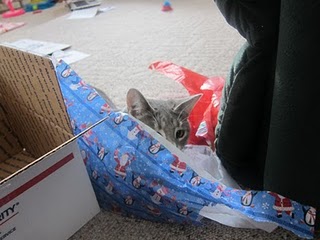 This is our friend, Gracie. She's not up for adoption. But we want to let all of you know about the Furriends of the CB Auction Christmas Photo Funraiser running through December 26 and all you have to do enter is to make a $5.00 donation to Brighton’s auction and email the photo to Gracie. (Check the auction rules for her address.) You can enter as many times as you like as long as you make a $5.00 donation per photo. Show something that you especially enjoy during the holiday time. Real photos or photo shopped photos will be accepted. The winner will be announced New Year’s Eve and they will receive a $20.00 prize paw picked out by Gracie. Help her make this a successful photo contest - please tell all of your friends about it.

And Gracie adds, Any furrie can enter! We do not discriminate with the doggies. They are my pals too!!!

So find a photo and submit it before you forget. Your $5 donation will help with Brighton's vet billand you could win a $20 prize package.

TravisLittleMan's sister Sammi had to be helped to the bridge Monday. They're fairly new to blogging and his family could use some encouragement.

Also, Moe ran off to the bridge after battling megacolon.  He doesn't have a blog but comments for his mom can be left on the Cat Blogosphere.

And our friend Genghis Khat's human Pellie has been very sick.  They tried to save a kitten they named Midnight but he was a feral and despite their help, he died in the cold.  They could use a kind word on their blog too.
Pawed by Jans Funny Farm at 12/22/2010 11:55:00 AM