In January we wrote a post on our New woofie Names -- Watch Where You're Going, Stop Yanking & Don't Step On My Toe. 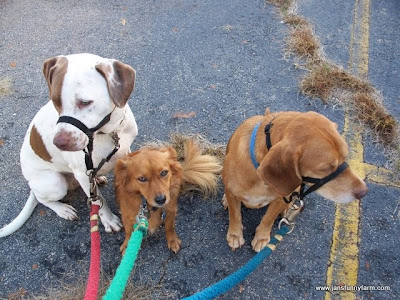 Sam, Merci & Buddy
Today we'd like to tell you about our other woofie names.

Before Jan's injured toe became infected and she could barely walk for the first few months of 2010, we used to walk her up the hill and to the end of the street twice a day.  Now she's a wimp and can't climb the hill so we have to do two half laps twice a day on more level ground instead of one long one.  There is one old man up the hill who used to greet us whenever we walked by.  One day he mentioned since he didn't know our names, he'd bestowed his own.

Coon, Bird and Skip.  Can you figure out which of us is which?

Sam is obviously a Pointer (mix) - a bird dog.

And although we'll never know what breeds Merci is, it doesn't matter.  Cars used to stop so the driver could tell Jan Merci is limping.  But there is nothing wrong with Merci.  She doesn't limp, she skips when she walks, especially when she's happy.

Now Coon, Bird and Skip we can live with.  But Watch Where You're Going, Stop Yanking & Don't Step On My Toe  have to go. 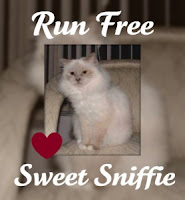 We are sad.  Sniffie of Friends Forever blog had to leave for the bridge Tuesday morning.  We thought/hoped she would have more time.  It is so hard to say good-bye but eventually the time comes when we have to let go because that's a part of loving them.
Pawed by Jans Funny Farm at 9/22/2010 12:05:00 AM