You might remember Chamberlin, the dog who survived two months alone in a yard with no food, water or companionship while the weeds grew up around him and he disappeared from view, an abandoned, forgotten dog.  When he was finally found he could not even stand up, could barely lift his head. But he's getting some muscle mass in his rear legs and has some energy now, thanks to the wonderful care and physical therapy he's getting.

The owners of the home were a couple who split and just moved off leaving Chamberlin tied to a tree. They were arrested, released and will be in court October 29 to face 2 counts of animal cruelty, which at this time is currently only a misdemeanor where they live.  As of December 1, animal cruelty will be a felony there.

In case you missed it, this is an earlier video of Chamberlin.

If the video won't play, click here. If you wonder what Susie's Fund is, it is the reason Chamberlin is receiving the help he needs.

Unfortunately - if you can even imagine such a thing - there was a second dog found in the house and he had to be euthanized because he was in even worse condition than Chamberlin.

This is Chamberlin after some physical therapy.  Quite a difference!

We are reading more stories of abandoned animals.  Folks just walk away and leave animals behind.  This needs to be a felony.  And those who do this should be forced in public court to watch a video of the animal's condition -- dead or alive -- when finally rescued.  And the court should order them to repay every penny of the animal's rescue, care and rehabilitation. 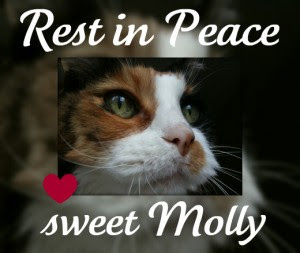 Molly of Cat's Cats was helped to the bridge Thursday. She had a good, long life, nearly 19 years, with her family but it was still hard for them to say good-bye.  We're late posting this because, as usual, Jan has been hogging the computer.  She's been trying to make more designs for our zazzle store but since our computer doesn't have a video card right now, it's a struggle.  So we've been laying low, but we do want to acknowledge Molly's passing and her family's pain.