Well, after about 20 hours of being without water -- not just us but the county -- we finally have water again. Going without water is kind of an Olympic event of it's own. The local radio station was announcing a boil water advisory but Jan couldn't figure out how to boil it if there isn't any available. She did get a small pot of water just before it went off and at one point this morning there was a fast drip and she managed to get a small dishpan of water to half fill the toilet bowl before the tap ran dry again. She wants to take a shower but she's afraid the water will disappear like it did when she soaped her hands this morning and found the drip had dried up.

The Late Night Human Wakeup
We just had to enter Cameron in this Cat-o-lympic event which is being hosted by Tuck. 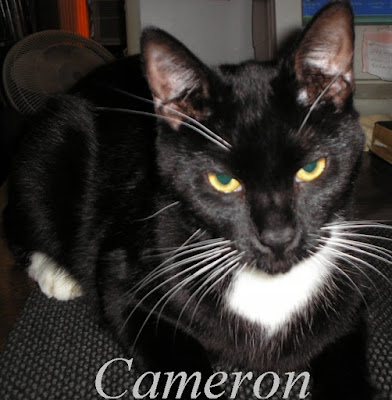 Cameron, our Late Night Human AND FURRY Wakeup champion!
This is an excerpt from our August 5, 2005 post, Waking the Dead.

Crystal says, sadly, “Grayce died suddenly and Jan didn’t have a chance to say good-bye. She knows Jenny’s time is short, so Jenny is getting as much attention as Jan can give her. Jenny was always affectionate but independent. She never liked to be held before, but now she’s eating up the extra attention.”

“I thought I would bawl last night when Jan suggested we say good-bye to Jenny because Jenny was going to go to sleep and she probably wouldn’t wake up.”

“You?” Cyndi asks, in surprise. “I never thought of you as the sentimental type, Cotton. Perhaps it was from lack of sleep since none of us got much rest last night, between Jan sitting up with Jenny and Mr. Clatterpuss waking the entire household after we all finally drifted off to sleep.”

“I resent that Mr.Clatterpuss remark!” The voice comes from underneath the bed.

“Come out from there, Cameron,” Percy demands. “What are you doing under the bed?

“Hiding.” Cameron’s head appears from under the bedspread. “I’ve been trying to keep out of Jan’s way. I figure she has enough on her mind with Jenny being so old and tired.” He tilts his head and changes his tune. “Actually, Jan — all of you — should be thanking me that Jenny is still with us today.”

“What?” the group choruses, in unison.

“Have you lost your mind?” Cotton demands.

“No,” Cameron asserts. “But if you remember correctly, Jan told us in the wee hours of the morning that when Jenny went to sleep, it would likely be for the last time; she probably wouldn’t be waking up again.”

“But Jenny is alive. She did wake up again.” Merci shakes her head, in confusion. “What does that have to do with you?”

Cameron looks around at the group. “It has everything to do with me. I’m not any more prepared to say good-bye to Jenny than any of you, so I couldn’t get to sleep when all the rest of you did. I tossed and turned on the counter, until in desperation, I decided to try a relaxed breathing technique I read about in a book. I took a deep breath, stretched, and suddenly there was a deafening clatter! Scared me out of one of my nine lives.”

“That’s because you pushed the dish draining rack off the counter, and all our stainless steel food bowls and Jan’s silverware went bouncing around the kitchen. The noise was loud enough to wake the dead!” Merci reminds him.

“Exactly!” Cameron exclaims. “The noise woke Jan, all of you guys — and Jenny!” He looks around at the blank faces of his friends. “See, Jenny did wake up. She’s not dead. You should all thank me.”

Percy shakes his head, in disbelief. “And you guys think Buddy and I are daft? Cameron, if Jan had caught you last night, you would probably be minus three inches in height and another one of your nine lives. I think you should go back under the bed until your concussion heals.”

Strong Cat Competition
We entered Cyndi in this competition which is being held by the Naughty Kitty Club. 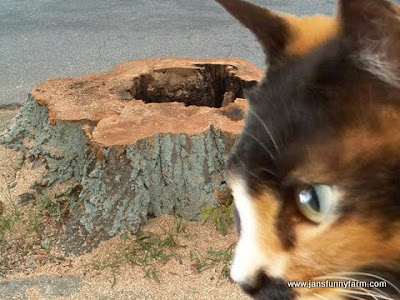 Cyndi and the tree she knocked down.
Yep, Cyndi knocked the oak tree in front of our house right off its stump! Jan was upset since that was our shade tree. However, when she saw how rotten the inside of the tree was she calmed down and eventually thanked our hero Cyndi for possibly saving the house.