RUSTY:  We love Friday.  It's the last day before the weekend and -

MICAH:  What's so special about the weekend?

RUSTY:  I don't know but everyone talks about the weekend as if it's special.

MICAH:  But what does it do?

RUSTY:  Nothing.  It just exists.  And then it doesn't.

RUSTY:  I don't know.  I think you're supposed to do something special on the weekend.

MICAH:  But we do that every day.

RUSTY:  So be different; get up early and have an extra cup of coffee to stay awake all day.

PERCY:  Uh, guys, why are you arguing about the weekend?  Every weekend we do the same thing.

CYNDI:  Today is Friday.  We're supposed to be introducing the cats from the Our Church Cat Family blog.

PERCY:  Right!  So let's cut the nonsense and finish the introduction.

CYNDI:  And after we finish, we can all take a nap. 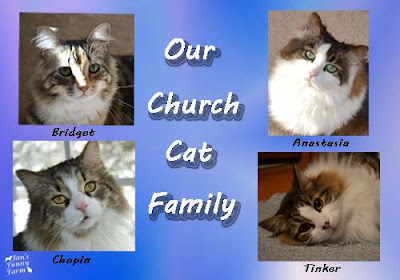 PERCY:  Now that we all know what day it is, you can read the interview - Church Cats Chopin, Tinker, Anastasia and Bridget - exclusively at Mousebreath, the ezine for cats.

BUDDY:  For those who believe in prayer, Jan highly recommends the movie War Room.  It's the first time she's been inside a movie theater in years!  A movie isn't in our budget but a kind woman paid her way and another gave her a ride.  She said it was so nice to see a movie without violence, bloodshed or weird imagination.


Join the Pet Parade blog hop hosted by Rascal and Roscoe.  It is co-hosted by Bionic Basil, Barking From the Bayou and Love is being owned by a husky.