MICAH:  Last week was not one of Jan's favorites.  On Tuesday, she lost two of three dogs during one walk.  (Packing Jan's Brain)

RUSTY:  On Thursday, she stood before a group and adjourned a meeting instead of opening it.  (Bloopers, Winners and Cat Chats)

CYNDI:  On Friday, we heard a rumor she allowed Marcus to strip down to nothing but a collar in public.

PERCY:  I'm starting to wish I could join Jan and the dogs on their walks just to see some of what goes on when we aren't around.

MARCUS:  Rumors of my nakedness were greatly exaggerated.  Oh, wait, no they weren't, but that was Jan's fault.  I only stripped down to one leash. 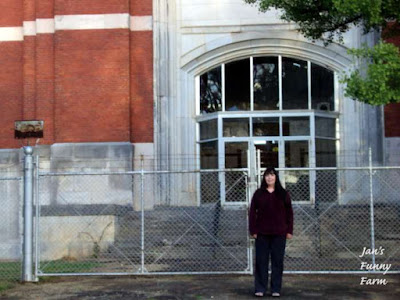 BUDDY:  We pass that gate every morning on our walk.  But we haven't seen a guard there before.  What did you do, Marcus?

MARCUS:  Me?  I didn't do anything.  And that isn't a guard.  That is Debbie.  She worked at the mill some years ago, then she married and moved away.  She was visiting her aunt and stopped by to take some pictures and relive some happy memories.

SAM:  It's a good thing she stopped by when she did.  There isn't anything left of that particular building except the front wall and that will be coming down too.

MERCI:  It's sad there has been so much vandalism over these last years.  The windows have been broken.  The fence is still solid and standing, though.  It must be sad for someone who once worked there to see it in such terrible shape and to know it will soon be gone, nothing but a memory. 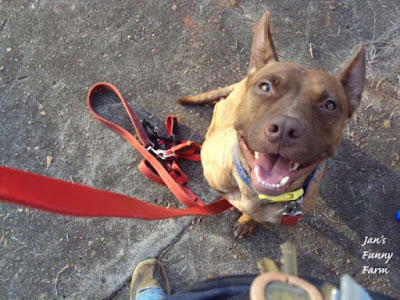 MARCUS:  Hello?  I thought you wanted to hear how I ended up almost nude.

MARCUS:  Well, I was taking Jan for an evening stroll when we ran into Debbie.  She and Jan got to talking about when the mill was alive and vibrant.  Jan had never been inside the mill but Debbie told her stories of when she (Debbie) worked there.

SAM:  Get to the point of the story, Marcus.  Nudity in a small town.

MARCUS:  I am getting to the point, but I had to lay some background first.  You know how two human females are when they start gabbing.  They forgot all about me.

BUDDY:  And I take it that since you were not the center of attention, you did something to shift the attention onto you.  Right?

MARCUS:  Sort of.  After they talked for a while, Jan took some pictures and while she was writing down her information for Debbie, she looked down at me and there I was, looking up at her wearing nothing but one leash attached to my collar.  Just like in the above photo.

BUDDY:  But you left here wearing a harness with one leash clipped to the front of the harness and your collar, and with a second leash attached to the back of the harness.   How did you take it off, Houdini? 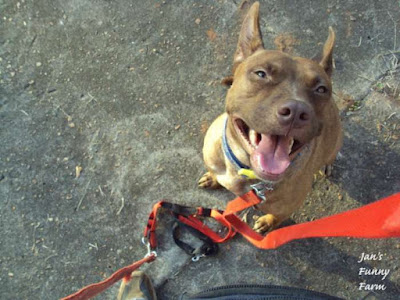 SAM:  Oh, it's too bad you didn't ... I mean, it's a good thing you didn't take advantage of the situation and run away before she got you dressed again.

MARCUS:  I hope Jan learned her lesson.  Two leashes attached to my harness and two eyes on me at all times!