SAM:  Last month we won fourth place in the 500th post drawing at Angel Pip's and Ruby's.  We won two magnets from their Zazzle store.

RUSTY:  They arrived at the end of January but a few days later Jan almost knocked herself out flying in an enclosed space.

CYNDI:  The flying was okay. It was the landing that was the problem. We've been kept busy waiting on her ever since.

MICAH:  And we do mean waiting.  She is slow as molasses so very little has been getting done around here. 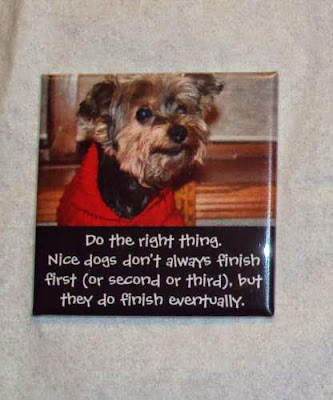 "Nice dogs don't always finish first (or second or third), but they do finish eventually."

SAM:  This is the magnet for us dogs.  We're sharing it with the cats, but it's really our magnet. 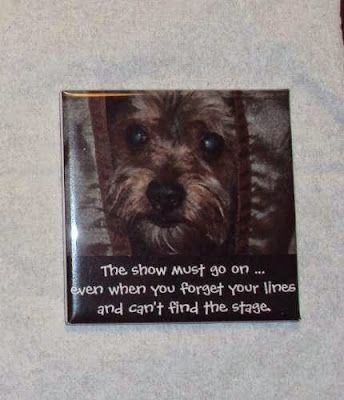 "The show must go on ... even when you forget your lines and can't find the stage."

MERCI:  We'll give you one guess who this one is for! Yes, you guessed correctly.  It's for Jan.  She is getting more forgetful.  We love the magnets.  Jan is going to put hers on the metal desk.  We want ours on the fridge.  Thank you, Angel Pip and Ruby, for the lovely magnets. 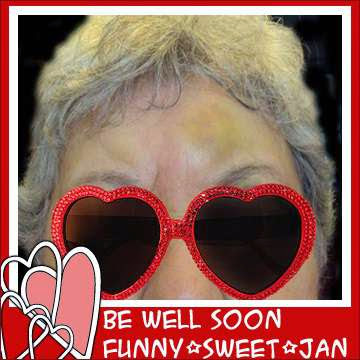 BUDDY:  Ann from Zoolatry sent Jan this Valentine card showing the bump on her head but her two black eyes are covered.  Our internet provider had an outage Saturday and this is our first chance to post this.  It made Jan smile.

PERCY:  Friday's episode with Marcus and Merci yanking her about to get at the aggressive dog that was coming after them has really aggravated the pain in her face, neck and legs.  She can barely bend her knee to step into the shower again.

CAMERON: That made 3 aggressive dog encounters in one week.  One direct attack and two close calls. We all seem to have lost our sense of humor during these last two weeks.  Do you think Walmart might have some on sale soon?
Pawed by Jans Funny Farm at 2/16/2015 05:00:00 AM